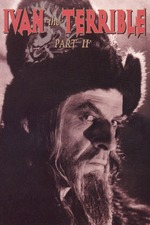 „His klobuk is white, but dark is his soul… .”
(Serafima Birman as Efrosinia Staritskaya)

Hi everybody, even if both finished parts are still spellbinding today, I prefer this second one even though they're more or less identical in their style, the operatic acting and magnificent staging, “Ivan the Terrible, Part II” is more engaging and in fact surpasses Part 1 when it comes to the cinematography.

Where “Ivan 1” felt more like a fast and episodic introduction in the historical realms of the titled character, part 2 benefits from a smoother pace, the well set foundation of the previous 99 minutes and seamless narrative which for the most part, refrains from jumping as hasty as part 1 trough the years. This is truly a tragedy of authority but more gripping, the fear and the paranoia of every character is prominent in each scene - a storm is brewing - and especially the better editing makes sure that we can really feel it. When the time had come to move to talkies, Eisenstein realized that he has to adapt his style of high-speed montages and find something that focuses more on portraying the "grimaces" in now often dim interiors. The shadows dance unearthly to the haunting score and we can just imagine the grand deal of work and attention that went into the planning of a perfect composition of lighting scheme, various camera angles, score, let alone the perspectives, the acting, monumental decorations and costumes and of course... the color palette! “Ivan Part II” has some of the most incredible huge shadowy images falling on the walls very reminiscent to works of Fritz Lang. It's a synthesis of aesthetic communication and “Ivan 2” reveals the power of combining both, black and white and color, it doesn't has to be just one as we can see the achieved special atmosphere and mood it can present.

Eisenstein is not famous because he managed again and again to depict important periods in his country's history, but because he did it so exceptionally well and both “Ivan's” are examples for his variety of skills. “Ivan the Terrible” has dialogue yes, but the story is purely told by the images as if this were another silent film of S. Eisenstein. We can seemingly watch the character's private thoughts leave the body through the exaggerated acting and overall the look may be very artificial but it had a beauty in it. Nikolai Cherkasov is completely convincing in the lead role and in becoming increasingly insane just as much as Serafima Birman as his creepy aunt who is so desirous for power that she would do anything to grant it for her son. “Ivan the Terrible, Part II” has lots of drama and conspiracies, very good characterizations, fascinating indoor settings, and plenty of action, not in the traditional sense though absolutely gripping.