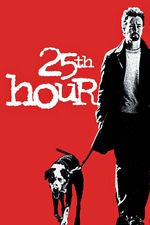 A film as much about the acceptance of death as it is about some dealer being sent to prison. Spike started filming this in the summer of 2001. Needless to say, things on the set changed in September. Not only is this a great 9/11 film, without technically even being about 9/11, but it deals so astutely in trauma and inevitable loss that it slowly molds itself into one hell of a meditative, stern look into the abyss. Everyone has to face a 25th hour. When it’s too late to do anything, your time is up, you can’t turn back, you can’t change things or make them easier or better, so you simply march forward into the liminal unknown. You can externalize your fears and hate toward others, you can also force it all onto your own shoulders, but it’s all coming down the line either way. It’s a film that doesn’t necessarily look at September 11th as a tragedy as much as it looks at it as an inevitable tragedy. This doesn’t really settle into that until the very last 15 minutes, but once it does it becomes a whole new film.