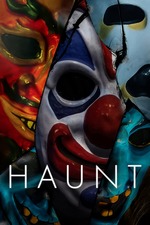 Who’s excited for October to arrive? I AM!!! I’ve been watching many scary movies and preparing for my annual review series of horror movies throughout the month and I wanted to watch this creative and cleverly made film. I will say that low budget horror movies are bad, but it depends on the outlook of it. But as a low budget horror flick, Haunt is not a bad one by any means necessary.

I expected Scott Beck and Bryan Woods to be these no name guys whose story was taken by John Krasinski for A Quiet Place. But no, they proved it by getting under your skin with its intense suspense and horror! They’ve created an incredible and fantastic horror film where a haunted house goes extreme with a gruesome body count! It’s very underrated, you’ll likely find it on Shudder or on DVD, but it’s an absolute classic. So take that, Rob Zombie’s 31! 🖕

By the way, does anyone know Scott Beck and Bryan Woods has another film coming out next year? It’s a science fiction thriller called 65 produced by Sam Raimi and starring Adam Driver. I can’t fucking wait! Anyway, I’m already rambling here, but if you want a good scary movie that you’ve never seen before, please look for Haunt. You won’t regret it!