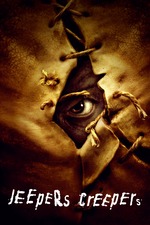 With all the sex abuse scandals going on in Hollywood, some supporters who loved and watch the movies made by actors and filmmakers have dropped them and stopped supporting them. So before I do this review of Jeepers Creepers, I am here to let you know I like the movie, but I do not condone the sick actions of what the creator had done to children behind close doors. Now with that out of the way, let’s talk about Jeepers Creepers.

Jeepers Creepers is about 2 siblings who are driving home from college on their spring break, but suddenly they encounter a demonic creature who become its targets for a ritualistic eating spree.

This was one of the movies that scared me when I was little! I was scared of Jeepers Creepers, the Child’s Play movies, The Exorcist, and Scream. I was scared to watch them because they were always on during Halloween at my cousin’s mother’s house, while we were watching cartoons in my cousin’s room. But as I got to my teens, I remember watching this movie on IFC, along with The Devil’s Rejects and Cabin Fever while I was sick at home with the flu. After watching those 2 movies, I was like, “Dude, I use to be scared of this flick, and now I’m not scared anymore because this is awesome!” Sure it’s not the best horror movie and it doesn’t beat all horror flicks in the world, but it is still a fun movie to watch, especially on Halloween with your friends or your spouse.

I’m going the start the positives. The acting from the cast was awesome! It never felt unrealistic, and give some of the creepiest lines that could make your skin crawl. The makeup and special effects were fantastic to make the Creeper look very scary and demonic, this look like something that would be in your nightmares. Not to mention that the film sticks to practical effects than using CGI. I know I’m going to get a lot of hate for this, but “He who shall not be named” did a decent job on creating this B-movie horror film. I just wish it was made by somebody else like John Carpenter or the late Wes Craven because it fits into their world of horror. Because the use of the “Jeepers Creepers” song is used for its scary and chilling effect is pretty cool for this film. This is what horror should be without spending millions of dollars to add CGI to make the movie effectively scary.

The only negative I can explain that is the controversy the director has done in the past. I know it’s not much of a negative, but hear me out. As much as I want to tell everyone to watch this movie, I feel that I can’t without people knowing or talking about the scandal of Victor Salva. Jeepers Creepers does not get the respect it deserves with it just being a horror flick that everyone can love and appreciate. Yes, it’s created by a sex offender. But I believe everyone should still enjoy it without people boycotting it because of the disgusting truth. So with that being said, I like this movie, but I don’t like the guy who created it. So if you’re still curious about this film, I would suggest giving it a chance, and try to have a good time.