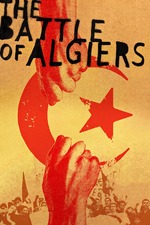 The Battle of Algiers

The Battle of Algiers portrays revolution and colonialism like no other film I've seen. The war trenches that hide under the city of Algiers are shown through harsh black and white photography. Acts of terror from both sides of the war are powerfully depicted, the film choosing to linger on the gruesome aftermaths of the bombings and violence that littered the city with devastating close ups of tears running down faces.

The most profound and compelling thing about The Battle of Algiers is the nuanced view it takes towards revolution. On one hand it stresses its necessity and shows the tyranny of colonial powers like the French, but it also asks of the audience if the violent methods that the FLN uses to revolt are justified and worth the end result. It doesn't give any answers. It's because of this very complicated view of revolution that makes the film so effective. You are supposed to take your own view point on the very real chaos and bloodshed that takes place, which only makes it all the more personal.

Morricone's score here is as usual phenomenal, and adds a bonus kick to the already incredibly moving and honest images on the screen. Pontecorvo mixes the documentary like realism that he creates with very difficult but important moral questions to make one of the most politically significant films of all time.