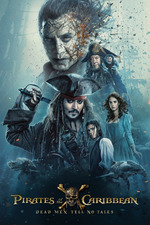 i really wanted to like this, and i did - though not with the same conscious disregard for flaws that i had with On Stranger Tides. this movie is poorly written, clunky as all goddamn get out, and predictably very heavy on that soporific, cookie-cutter fantasy mythology that i hate (the ancient mythical crystal of the curse of the blood of the world of the mythical ancient stone of the dead of the world of the past of the legend of the stone of the etc.). but despite all this, i managed to have a good time. it looks beautiful (much more beautiful than the grayscale color-palette-of-a-Hoobastank-music-video bucket of porridge that was At World's End but not as beautiful as the Olde Key West postcard that was Tides) and it's decently entertaining for most of its runtime. i'm well aware depp's performance is as horrible as he is but honestly, you could dress him in a $20 halloween store pirate costume and have him stumble around and say "rum" over and over again for an hour and i'd probably enjoy it. i've always liked the jack sparrow shtick and even if this movie turns it into self-parody (which it very much does) it's compelling to me.

i was wavering between a 2 1/2 and a 3 but i'm giving it a 3 because 1. fuck it it doesn't even matter 2. the final setpiece was cool as shit 3. the way javier bardem says hola esparro and 4. i'm going to wdw at the end of the year and i'm too hyped

The Last Flight of Noah's Ark