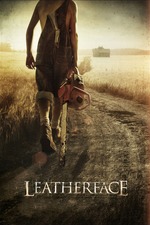 It was going to be one star, but that last few minutes showed some balls I can't deny were exactly what the rest of the movie needed, so an extra slice of star added for that in all fairness.
Of the two 2010s reboot timeline movies that sandwich the original film, this being the prequel, this one feels the least like a TCM movie, and everything different it does is stolen and poorly delivered.
It's an unusual film to even think about, it patches together movie moments from a load of different films, horror or not, like some student film frankenstein of unoriginality, but with a mid range studio budget and a reasonable cast that doesn't justify such distracted filmmaking that throws out random homages, when it can't even nail its own franchise.
None of the characters are even remotely likeable and this part of the '10s reboots also does the bad deed of making Leatherface the victim, but in this one it's ramped up to the extreme, and many more plot inconsistencies are scattered in to join those left by the 2013 installment in this timeline.
I wont bother diving into the filmmaking aspects, as there's not much that inspires human thought either way; it just is what it is I guess, neither one way or the other.
Over the 2013 one I would say the gore is dealt with far better, but you have to get through so much story you either don't care about or can't ignore the flaws of, that those payoffs just feel misplaced in the movie.
That ending sequence was insane, maybe just in comparison to the snooze through the rest of the film though, it was what you wanted the film to be all along - that Prometheus ending where they give you a whisper of the DNA of the franchise, after the 'something new' story of the main film comes to mind, except the buildup of that film was entertaining too and actually made sense (until covenant screwed so much of that direction over, but that's for a different review altogether)
Leatherface is an unnecessary prequel that is poorly written, cast, acted, shot, and delivered, and adds insult to injury where it shows you in the final moments exactly what you wanted from the film... too little too late? That's the impression I'm left with sadly.
We're soon to be getting another reboot attempt for TCM, as with this timeline I'll keep an open mind, but naturally my hopes aren't too high the next time around -
Perhaps a franchise as horrifying as The Texas Chainsaw Massacre doesn't belong in this modern, sanitary world, and what a shame that is! I truly hope real visionaries will do TCM some well deserved justice once again someday!