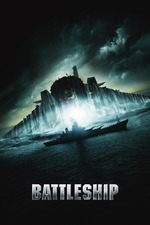 I'm really not sure why I watched this except that I was talking with some friends about the bizarre the Battleship (2012) video game adaptation for the Xbox 360, which surprisingly *isn't* a game of Battleship but is instead a weak cinematic FPS.

The movie? Weird as fuck. Not good. Rihanna's in it, she's decent. The aliens have some of the weakest design I've seen in any movie, ever, the special effects in general are really hit-and-miss, and the plot is... well. I guess there *is* a plot, which is kind of as good as you're going to get.

Somewhere in this two hour commercial for the United States Navy there is something resembling characters, but not really. There's like, aliens? They land, and conveniently they land right next to this big international Navy war games thing. You'd think that means they're fucked, except all those boats are useless because the aliens put up a big force field.

Anyway, all of the movie is wildly hit-and-miss but it DOES have my favorite trope of all time in it, which is, put simply, the moment where they have to take an old thing and bring it Back In Action and I fucking loved that whole bit. It's basically the exact same plot thing that happens in the first episode of Battlestar Galactica if you're familiar with that except this time it's boats not spaceships. And it rules sorry. It rules.

Also, the entire thing this movie is based around is the reveal of the "battleship gameboard" as you might expect, and the way they do it is both ultimately stupid and also surprisingly coherent w/r/t the structures set up in the plot. It's fucking. Bonkers.

Basically the movie is real mediocre-to-bad for the first 2/3 and the ending is pretty fun and goofy. That's the review