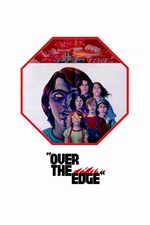 They were old enough to know better, but too young to care!

Where have all the kidsploitation movies gone? I guess the recent spate of YA adaptations have usurped "youth gone wild" pics and made them respectable (in which teen rebellion is taken very literally). Over the Edge is not exactly a classic of the subgenre, and is rather shoddily made, but it has its illicit pleasures. It is perhaps most noticeable for Matt Dillon's screen debut as the most wayward of all the teens, though Tom Fergus as perpetual stoner Claude gives the most authentic - and entertaining - character portrayal. When it should be generating an atmosphere of simmering tension ready to boil over at any point, it sort of ambles along instead, nor does it seem to commit to a message or follow through on its themes. The film touches on issues of a rich/poor divide, planned communities, suspicious parents, suburban boredom manifesting into unruly behaviour, etc., but while commendable on not strictly picking sides in theory, it feels more 'have your cake and eat it' in execution. However, it snaps into focus about two thirds of the way through, and while its climax promises more than it delivers (certainly doesn't live up to the trailer tagline), there's still enough here to warrant a watch (and a pretty good soundtrack to boot).