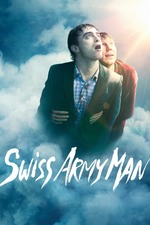 Daniels have been a favourite of mine for some time now, through their shorts as much as their music videos. So I was on board as soon as their first feature film was announced. Even with the premise and the initial reviews that came out, I knew they'd deliver as they aren't just out to shock or do things for the sake of wackiness and whimsy. There's a unique style and sensibility throughout their work, coupled with pointed emotional resonance in unexpected places (witness their music videos for The Shins' Simple Song or Manchester Orchestra's Simple Math, or even the bizarre beauty found in Interesting Ball).

The sense though with Swiss Army Man, despite its eccentries and invention, is that I wish they could've let rip more. Perhaps they felt the need to dial it back or measure those moments so as not to become toooo weird and lose the audience (though not sure exactly what line that'd be, as it crosses beyond the reaches of normality in the opening minutes). But the montages of Manny's super-powers whizz past so quickly, their enjoyment is fleeting.

The story itself is also a little tired, a familiar "teach me about the real world" fish-out-of-water tale - usually reserved for robots learning to feel, aliens learning about earthmen, children who've been brought up in labs and discovering society for the first time, etc. It's a novel take, and there are still a bunch of great jokes that come with it, but I'm not sure how many more "what is this thing you call...love?" plotlines I can take. (For a very successful and uncliched take on life, love, and relationships, The Lobster remains a recent champion).

But these reservations aside, it is still a joy to see Daniels play with a larger cinematic canvas, and it manages to surprise and play with expectations. And none of it would work if it weren't for an excellent performance from Daniel Radcliffe, as maybe the most endearing and entertaining on-screen corpse outside of zombie cinema.