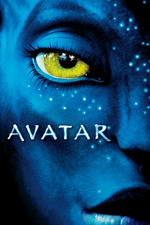 James Cameron's work is almost always working on some level of cinematic metacognition – from The Terminator onward, his output has quite literally manifested and responded to his personal questions and anxieties (frequently rooted in serious scientific inquiry).

Avatar is especially puzzling and complex in this regard, which is easy to overlook given its foregrounding of overwhelming affective experience. I would argue, though, that the film’s commitment to sensorial overload is foundational to what it is saying and doing. It's no coincidence that the Pandora landscapes form a sort of pan-psychic neural network bridging the gap between dreams and digitalia. To that end, it’s necessary to mention that Cameron mined the majority of this film’s images from a place of unconsciousness, citing his own dream-states as a kind of arterial well for inspiration. In this sense, he partially surrenders his allegiance to the empiricism and functionalism of “hard sci-fi,” investing faith instead in the archetypal power and associative affect of colours, movement, and textures.

As such, Cameron’s Avatar bears easy comparison to George Lucas’s Star Wars films. This link plays out in numerous other ways, especially considering that both filmmakers push forward a vision of pure “tech romanticism,” which roots itself as much in the mystic and enigmatic as it does in the machinery and rigor of production. We see problems in both auteurs’ work, too. Both apply simultaneously essentializing and post-racializing logic that deserves scrutiny, especially coming from such wealthy white men (Lucas boils down all religious and cultural narratives into a quantifiable list, and Cameron cites an array of indigenous populations as the inspiration for Avatar’s tall blue Na’Vi).

I cannot evaluate Avatar in spite of its ideological problems, but must rather accept that those issues are imbedded into its foundation. Cameron uses the coding of genre to represent indigeneity itself as the essence of a utopic space, wherein a white man can excise himself of his historical racial burden and change bodies altogether. This is not something that can be ignored.

At the exact same time, the director employs genre (and film technology) as a positivist mode for world-building. He’s not absolved of his narrative shortcomings, but he makes a point of emphasizing that this all-too-familiar plot framework is a compass for the audience navigating new form, rather than vice versa. As elsewhere in the director’s oeuvre, the form itself is where the reading necessitates focus… the revisionist popular narrative emphasizing Avatar’s deficits in dialogue, characterization and plotting misses the point altogether.

This is by no means my final reading of the film, but rather a series of questions that serve as placeholders for further discussion. It has taken several viewings for me to register just how vast and complicated and beautiful this film really is. Hopefully there’ll be more writing to come. I think it's one of the most challenging and stunning films of the 21st century so far.