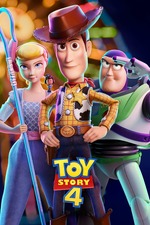 Don't worry, to those of you who have either seen, or are about to see the closing chapter to Pixars most treasured franchise, you'll understand that being trash is indeed the most valuable compliment I can possibly deliver.

What made the, admittedly, slightly unnecessary continuation of this franchise so special isn't just the cast of already loveable & established characters, not just the themes of friendship, family, belonging, freedom & self-fulfillment, but how effortless this all felt. I'm not exaggerating when I say I have never come across a franchise with a collection of entries that is as easy to sit through & enjoy as the Toy Story franchise. To put it simply, everything just works & I'd really be reaching for a major flaw that I found within this movie.

It's rare that I don't ever contemplate the length of a movie, don't ever feel hinderances on the pacing, don't ever doubt the credibility or motivations of any of the characters & not once can I recall being bored in any regard. As a fan of this franchise since childhood, I was consistently engaged, consistently entertained & never once felt like I'd had enough of whatever was being thrown at me.

That is so, so rare. At least for myself personally, since most movies these days really feel like a chore to get through at times.

Toy Story 4 does more or less follow the search & rescue mission setup of previous installments. There are some minor tweaks in how everything is established & re-introduced, but it more or less is what we've come to grow familiar with. Of course there are new additions to the cast with a miriade of side characters, all of whom have a moment in the spotlight to shine & familiar themes that don't just wonderfully bounce off of Toy Story 3, but managed to capture my complete emotional investment without feeling forced or tacked on.

The narratives familiar structure seems like a detracting factor yet never is, because this story benefits from the magical world surrounding it that feels like the inside of a childs mind. Everything surrounding Woody, Buzz & the rest of the gang is bursting with imagination. Not only is the animation here probably the best I've ever seen in a Pixar movie, it enhances & makes everything feel alive down to the most minor of details to things like character shadows, rain drops, rough textures & even the slight damages/scrapes characters happen to take along their journey. Some of the ways in which more modern toys are utilized in terms of personality or even just their practical purpose is so much fun to watch, and I was actually surprised to be as creeped out as I was by one particular set of toys we meet early on in the story. It's all done with a creative flare that is impossible to not admire. Pair this up with a genuinely heartwarming, funny & moving narrative, you easily have all the ingredients for a classic animated feature, which I certainly think this movie has the right to call itself.

As unnecessary as it may seem, Toy Story 4 ends up being a film that I never knew I needed. It brilliantly takes a franchise I really never wanted to see again & pulls out a story that is bound to leave anyone with a smile on their face and provide a wonderful sense of closure, knowing these characters (hopefully) have had their one final ride into the sunset.