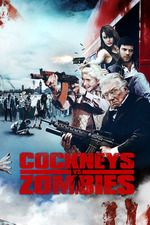 Came into this one expecting crass, poorly executed stupidity, and ended up getting a surprisingly funny and engaging farce on the zombie genre. Clearly I didn't expect this film to be a technical marvel; there were a few noticeable continuity errors between cuts and some visibly poor scar make-up on one character, but the majority was surprisingly competent and the film featured some fun and creative practical gore effects.

I shouldn't have to point out that this film doesn't take itself seriously at all, but I was surprised at just how invested I became in the characters. I think it helped that this is likely one of the most English films I have seen in a while, and having been born and [mostly] raised here, I can tell you that I come across people just like many of the protagonists on a daily basis. The film follows the stories of two [connected] groups of people surviving a zombie outbreak in east-end London; a fairly young group surviving after a bank robbery gone wrong, and a group of OAPs barricading themselves into in their care home. It is with the latter group where we have what is one of the best zombie chase scenes I have seen in a movie, where an elderly man with a Zimmer frame has to outrun a group of zombies. It was also refreshing to see a zombie film where the characters don't pretend not to know what zombies are. They are so engrained in pop-culture now that it is laughable when we see characters in films failing to understand their situation.

Not as good as 'Shaun of the Dead' (obviously), but if ever you feel like putting on something silly, fun and easy, I don't think you're likely to regret passing the time with this.