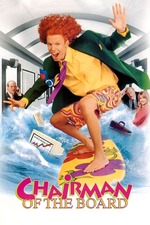 The first scene of Chairman of the Board is Carrot Top looking back fondly on when he was born. Carrot Top (shown as a several month old baby with a red wig on) is just chilling out inside his mother’s uterus as she‘s in the hospital giving birth. There are pictures of his father (a sperm cell) hanging on her uteran walls. He has a full chemistry set that he is working on inside her vagina and by magically pouring one chemical vial into a beaker, he explodes out of her and crashes into the wall. He leaves behind a Carrot Top baby shaped hole in the wall where he busted through and a nurse holds him up on the other side and says “it’s a boy!” and now the baby has considerably longer red hair.

Say what you will about Chairman of the Board but at least the film lets you know what kind of a piece of shit it is in the first 2 minutes. I wish more shitty movies did that.

As far as “types” of movies go, this is a fun throwback to a bygone era of The Gimmicky Stand Up Comedian Movie. You see, most stand up comedians will eventually try and parlay their wit into other forms of entertainment. The good ones that stand out usually go on to places like Saturday Night Live or if they’re lucky they get their own sitcom to cut their entertainment chops on. But what’s a person to do when they’re a one note idea and they have no acting ability? Why, they get to star as their thinly veiled self in a major motion picture! These types of movies are usually commissioned by a movie studio on the fringe hoping to cash in on the recognizability of the performer and make a quick cash grab by serving up more of what they think you, the audience, will like. You can recognize them by their silly and often times family friendly premises, their safe PG-13 ratings and their complete and total devotion to portraying the comedian in question as the center of the whole fucking universe. Everyone agrees with them, they’re always right, they’re down on their luck but everybody is rooting for them and you’re supposed to too, no matter how despicable and dog dumb their characters are. (Note: this same tactic applies to Gimmicky Musician Movies and Gimmicky Athlete Movies too)

Great recent examples of this formula include the trio of Larry the Cable Guy movies that America was forced to suffer through (Larry the Cable Guy: Health Inspector, Delta Farce and Witless Protection) and the trio of bad Dane Cook films (Employee of the Month, Good Luck Chuck and My Best Friend’s Girl) shortly after. Curiously both sets of films were released by Lionsgate Films, who now also proudly owns the rights to Chairman of the Board.

The gimmicky idea this time around is that Carrot Top plays Carrot Top. He is a goofy spaz with the added dynamic that he is a surfer now. Is real Carrot Top a surfer? I’m not sure. All I know about him is that he used to show up on Jay Leno and pull strewn garbage out of metal footlockers for 10 minutes and he’d try and pass it off as inventions. So in the movie he’s an inventor now and the movie takes a lot of time in the beginning for him to show off his bag of crap inventions. But the movie is also quick to point out that his ideas are eccentric and sometimes over the heads of his the people he’s pitching them to, so you remember what a genius he is despite his inability to pay the goddamn rent or be able to hold a simple conversation.

Through a series of implausible events Carrot here is named the new chairman of the board at McMillian Industries. It’s a company that creates inventions so that makes sense but the whole premise is just an excuse to have him humiliate evil Larry Miller over and over and to use that sweet BOARD pun cause he’s a surfer AND the leader of a BOARD of directors. A bunch of other boring shit happens and you can imagine exactly how it plays out so I’ll spare you all the unnecessary details.

As bad and disposable as this film is, it is a bit interesting for 2 big reasons.

1. It’s an amazing example of a bygone era of shit filmmaking. With too many options now of how to get your entertainment I suspect vanity projects like these have gone the way of the dinosaurs. They will always exist as long as phony “media moguls” have an ego the size of Texas and believe they can act but not on this grand a scale. What used to be these shitty types of films have now become shitty you tube channels, shitty instagram accounts and at the very most shitty VH1 reality shows. Studios don’t just hand out 10 million dollar budgets like they used to for people off the street anymore. You have to have some kind of proven commodity now to base it on. It doesn’t have to be much, but the failure of films like these and the overabundance of people vying for an opportunity have muddied the waters too much for studios to gamble with.

And 2) This film is at the center of the greatest break in fallacy of the talk show dynamic in television history. In 1998 on Late Night with Conan O’Brien guest Courtney Thorne Smith was promoting the film. And on it, Conan’s first guest Norm Macdonald was still on the couch listening to Smith babble on about how she enjoyed the film and how Carrot Top is a great guy and blah blah blah. Her insincerity must have struck a chord with Macdonald as he chimed in and added “Hey! What’s the name of your movie there? Chairman of the Board? I got a great name for a Carrot Top movie! Box Office Poison!” which left Smith stunned and Conan embarrassed as fuck all. But since Conan is a top flight comedian and host, he somehow turned the interview back on track, even integrating questions for Smith into the interview as to why she would leave a top rated TV show (Melrose Place) to be the female love interest in a Carrot Top movie. She had no firm answer, because honestly, there is no good answer to that question. And after sensing she was at ease, Conan got the plug out for the film one last time and took a jab at Macdonald, saying “Chairman of the Board…let’s see you do something with that title smart guy” and Norm, never to be outdone, paused for a second and said “Yeah, but I bet the board is spelled B-O-R-E-D!” and Conan erupted in embarrassed laughter. He was clutching his mouth with both hands and pacing around his desk. Smith slumped back in her chair, glowing red from embarrassment, and Macdonald sat back smiling ear to ear, as if he knew how hard he just made me laugh and how happy he made all of us for saying what we all were thinking.

Really, that stunt probably should have cost O’Brien his show and banned Macdonald from the talk show circuit forever. But nothing happened. In fact, Smith even ended up guest starring on Macdonald’s sitcom just 2 years later. Everybody knew what a stunning piece of shit Chairman of the Board was before it had even come out, and even the people who were paid to promote and speak highly of the film couldn’t lie for it’s sake. It’s perhaps the greatest example of an unmitigated disaster of a film that somehow still got made and received theatrical distribution. But that means it’s usefulness will live on for generations to come, as a time capsule example of misguided human interaction. So as aliens or evolved deer or whatever creature that has overthrown humanity paws through the wreckage and rubble of society they can view Chairman of the Board as an instructional tape that can teach them how to act like the missing link between non-human and functional. It will teach them how to integrate into feeling our emotions, beginning with disgust and undeserved confidence and their tribe of elders will have chancellor Ernest P. Worrell, secretary of treasury Larry T.C. Guy, health and human services representative Howie Mandell, director of transportation Andrew D. Clay and the chairman of that board will be none other than Mr. Top himself, fulfilling the prophecy and damning our cursed scorched Earth for all of eternity. Man, I sure hope I’m alive to see that. That’ll be funny as shit.