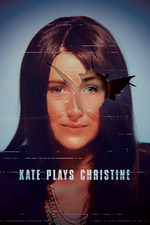 In a myriad of ways, Kate Plays Christine functions as an anti-film, for documentary and fiction films alike. The film poses many questions: what is real? Are documentaries trustworthy? Are all stories worth telling? These questions only presented themselves only after the film had ended. While I was watching, I had a very unpleasant experience, annoyed at both the film’s inability to submerse me into the ‘world’ (to create suspended disbelief for me as the viewer), and to provide a digestible plot or storyline through the retelling of Chubbuck’s life and reasoning for suicide. In retrospect, the film succeeded at failing, because it sought to undermine the ‘normal’ experience of a film by deliberately negating the attributes I was all too familiar with experiencing.
Critiquing this film is an easy feat: it was too long, the climax wasn’t worth the wait, that the story isn’t worth telling, interpersonal relations brought unnecessary drama, poor acting etc. It is more challenging to acknowledge what the film does right, which is ultimately a lesson in empathy. The majority of the film, the actor attempts again and again to put herself in Chubbuck’s shoes, in trying to inhabit a troubled and deeply suffering human. I also acknowledge that by portraying her life ‘poorly’ in a soap-opera way, the film succeeded in telling the audience how easy it is to diminish someone’s life to one event.
On a positive note, Kate Plays Christine made me realize the fallibility of documentaries (of films in general), that not everything portrayed is honest or accurate, that no one is genuinely themselves when a camera is rolling. Although my experience was unpleasant for the most part, I enjoyed the perspective on film that it provides.