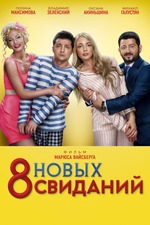 Conceptually this one actually makes a lot more sense than the first one. Where "8 first dates" utterly failed to show what it is so unusually complementary about the two characters that would justify wishy-washy magical realism device working extra hours to draw them together, this film's arc is pretty straightforward. Married couple has a quarrel, both spouses accusing another in not really pulling their weight, so fantastical device is here to draw them apart, trapping them in relationships with other people that more fully embody what they think they want their partner to be (woman's new husband is super affluent and resourceful, man's new wife super caring and domesticized), and help them realize there is more to life as a couple than performance of certain, in many ways societally imposed and arbitrary duties, and rediscover the precious things about each other they grew to take for granted.

This is supposed to be what the writers were after, or so one thinks. They were obvioulsy doomed to failure, however, because characters, as established in the first movie and reintroduced here, have no substance or specificity, perfectly succeeding in being these blank slates for the viewers to project onto, and nothing more. So there is no admirable personality traits for them to rediscover in each other, no events to recal to trigger realization what a lucky couple they are. And so when the filmmakers cannot make the couple seem like a good idea on it's own what they are left with is making their alternative pairings so much worse. Make them more specific in such a ridiculous, vaguely icky way that viewer will root for the main couple of non-entities at least on the account that they are not THESE PEOPLE. Sure, the main hero may be a total waste of a man for the considerable portion of the movie, but at least he's not *GASP* an Armenian! And though there is little substantially wrong with a new female character her particular blend of domesticity is easy to translate to shallowness and so she is sure to seem silly and unrelatable to modern audiences. And both of them are so pathologically jealous! What could've been about tempering unrealistic expectations of your spouse little by little dissipates into this wet dream about how much hotter your sex would be if you had to sneak around to do it.

Of course all this is just a half of the problem, the other being that the jokes are generally hacky sparse. Where predecessor at least very much succeeded at being inoffensive, this one is more consistently vulgar, stars illogical and unlikable stereotypes, and insults the peoples of the Caucasus to boot. Overabundance of hollow shenanigans with intended to heighten comedy point-of-view shots reeks of flop sweat probably indicating that this was made quickly to capitalize on the commercial success yada yada yada.