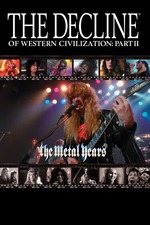 The Decline of Western Civilization Part II: The Metal Years 1988 ★★★★

Speaking of Lemmy, he's one of the few human beings interviewed in this pretty notorious documentary who doesn't come across as a complete nimrod or discombobulated (Aerosmith and Alice Cooper make it out okay too). The three highlights of the doc are arguably the Chris Holmes interview (which is enough to drive anyone to sobriety), Ozzy being interviewed in his kitchen (which has been revealed to be almost completely staged. Big wag of the finger to PS for that), and the Megadeth portion of the flick. Even as someone who was never a huge fan, their presence and commentary on heavy metal is such a breath of fresh air to viewers who have been smothered by cheesy glam metal doofuses for 95% of the film's running time. I kind of wished they had touched on how much the bay area thrash metallers HATED the L.A. glam scene, but you can just read a book or watch something else to get a better perspective on that.