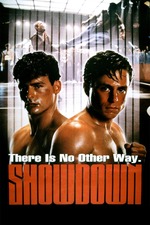 Inspired by the classic Karate Kid, the film has what that film has...new kid being bullied, trained by a maintenance man (in this case an ex-cop played by the legendary Billy Blanks) with one small difference. The bully's coach is after our maintenance man for the accidental death of his brother years ago and attempts to have him killed just when the newly trained hero challenges the bully to a fight in an illegal underground fight club run by the evil coach.

Kenn Scott, who played Raphael in Teenage Mutant Ninja Turtles II (the suit actor), is quite interesting to watch and even gives references to Karate Kid during training. Billy Blanks thrives as the heroic Billy, the ex-cop turned high school maintenance man who becomes the hero's teacher. Ken McLeod brings the cockiness he brought in College Kickboxers and amps it up as bully Tom.

Jeff Imada's fight choreography is well done as he lets the actors who can fight show off their talents. Scott, McLeod, and Blanks are excellent martial artists and they get a chance to shine here. John Asher provides the comic relief as Ken's buddy Mike while a pre-fame Christine Taylor plays Ali..errr, Julie, the girl who grows tired of Tom and soon becomes Ken's love interest. And Patrick Kilpatrick as the evil coach Lee...nuff' said. He's meant to play villains and does a great job.