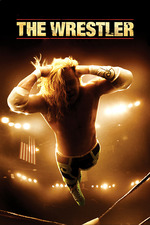 Martin Amis published a collection of critical writings called "The War Against Cliche," and while I find Amis to be mostly a wank-job, that phrase points at the job description for all critics worth their salt; warriors in the battle against cliche in all its forms. Cliched sentiment and narrative murders films. As soon as you as an audience member think "oh, I recognize that!" during a scene in a movie, you might as well walk right out of the theater. The suspense and uncertainty that gives film its singular emotional intensity as an art form evaporates; you know what's going to happen. Go get some milk dudes, sneak into a different theater in the multiplex, and try again.
But there are exceptions.

Occasionally, you'll have a filmmaker take it upon themselves to embrace shopworn cinematic tropes for the express purpose of making them vibrate with energy just to show how badass they are. Darren Aronofsky is one such cocky bastard.

There is not a single plot point in The Wrestler that isn't telegraphed well ahead of time. There isn't a single character who couldn't have been ordered directly from the Stock Character warehouse with no modification. In fact, the film conforms to so many failiar scenarios and recognizable characters that it seems perversely intentional on the part of Aronofsky and screenwriter Robert Siegel. They throw down the gauntlet; challenging the audience to endure scenes of miserabilism and humiliation they've seen hundreds of times before, confident in the knowledge that they have infused every warmed-over element with a richly textured humanism and a string of insights that make all of the cliches relevant. They cut open cliches to expose the beating heart within.

Mickey Rourke is central to the vitality of a film so shot through with the familiar. Some of the power of Rourke's performance comes from the knowledge an audience member brings to the movie about his fall from grace and redemption. But even if you go into the movie thinking that Mickey Rourke is a new fangled brand of tractor, it's impossible not to feel the rawness of Rourke's emotional vulnerability. He bleeds right off the screen. And on the screen. A lot. One of the preeminent subjects of the movie is the human body; its joys, its exploitation, its inevitable decline. Aronofsky films wrestling matches and strip shows with brutal frankness.

The other element in The Wrestler that elevates the cliches is Aronofsky's rapt attention to detail. He glories in the soul-crushing mundanities of strip-mall/strip-club nowhereseville, as well as the specific pathos and grace of the small time wrestling subculture. Aronofsky's unblinking camera captures insights into the deadly allure of performance and self-mythology, reaching a high point of analytic incisiveness in a scene where Rourke's washed up pro wrestler turns his job at a deli counter into an opportunity to do a little of what "The Nature Boy" Ric Flair would call "stylin' and profilin'." With all of this rich context and wisdom, the cliches begin to feel less like lazy contrivances than the heart-breaking inevitability of Greek tragedy. Call it The Greco-Roman Wrestler.