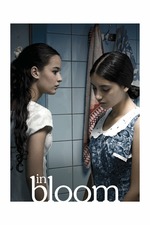 oh wow...i’m always in awe of movies that are slice of life and manage to capture reality so well without being overbearing or dramatic. unlike a lot of other reviews on this movie about its ‘lack of structure’, i actually didn’t feel like the story was aimless at all — but maybe it’s because the mood of the movie fit the feeling of ‘aimlessness’ so well in the first place.

in a way, from the very beginning i had a gut feeling that i knew what was going to happen, but it didn’t work against the movie nor did it make the movie predictable. when i say ‘i knew’, i mean that it was obvious that there were certain expectations set on young women/girls in 90’s post-soviet georgia, a society in which men held power over the decisions of women, where men freely harassed them on the streets and could take advantage of them to get the outcome they desired.

i felt so much for the two protagonists of the film, fourteen year olds eka and natia. the two girls were both different and alike; natia was bold and willing to bite back to the men and boys who harassed her friend, and eka was reserved but equally caring in her own way.

their friendship was constant, something that i quickly understood would probably not break, so i put those cliched worries aside. this wasn’t that kind of movie. the two girls would be there for each other because they truly had no one else. who was going to be there for them? no boy, no man, no husband could ever understand how relentless society was in the way it imposed adulthood on girls.

when together, eka and natia could be normal teenagers, just two girls giggling, going to school, hugging and talking about things that kids talk about. but at the end of the day, when eka and natia parted to go to their respective homes, they were forced to carry the depressing burden of growing up too soon in a society that barely let them live their adolescent years in the first place. damn! damn.