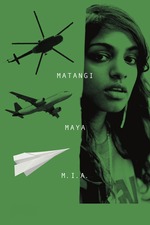 ok. watched this on a whim w/ my friend because she rly likes m.i.a.'s music! i only know that one song that everyone knows but this documentary did an extraordinary job in pulling me in to her world. even as someone who doesn't know her that well, despite some of her (present) problematic viewpoints, i was able to appreciate where she came from and why/how she makes the music that she does.

her confidence is powered by the need to show people the injustices that are happening in sri lanka, her music and visions are raw and deep-rooted in her homeland, her culture, but also the immigrant experience in london. throughout the movie, i was in awe of how she knew exactly the kind of music and image she wanted to create, and how every lyric of hers came from a place of importance. she's admirable and inspiring in that regard.

i think it's a shame that the media didn't take her seriously as a politically-driven musician - instead they were too focused on how she was suddenly on top with a catchy song. they probably don't take her seriously today either, considering she hasn't had a radio hit in years. to be honest, i thought she fell off the face of the earth. but she exists and still makes music and is still as driven as she was before.

in the doc i learned that much to the people's dismay, m.i.a. grew as an artist and as a person. she committed to a partner, had a kid, and found some sort of home in the world of activism beyond the lyrics of her songs.

ofc growth is inevitable, but what hurts is the backlash that might come with the growth if you're a person who's in the spotlight. m.i.a. reveals towards the end of the doc that the people wanted to keep her as the poster child for the immigrant struggle while simultaneously suffocating her political voice.

it's just unfortunate that no matter how hard she tried to shed light on the war in sri lanka, that voice of hers never caught the attention of the media and the music industry.

no amount of graphic images of death, bodies of brown people, stories of injustices and resistance was enough for the media to pay attention. but the moment m.i.a. did something like stick up her middle finger to the camera in the middle of her superbowl performance with madonna, she was suddenly in the spotlight again.

the painful truth is one that we already know: western countries (america/UK/white countries that hold global power) don't care about war going on in a country that doesn't benefit them. what they do care about however is the threatening presence of a brown girl taking the music industry by storm with a politically-driven message and a big "fuck you" to all who those turn their cheek. whew.