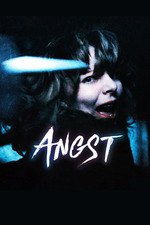 Angst proved to be a difficult experience for Gerald Kargl. Not only was he in the director's chair for the first time but also co-produced the film, putting up a great deal of his own money to finance it. 10 years down the line, he would be taking jobs directing commercials just to pay off the legacy of debts accrued by the making of the film. Its lack of profitability was mainly due to the failure to find widespread distribution outside of his native Austria. The raw treatment of a very dark subject proved unpalatable to distributors and censors alike.

As the basis for his film, Kargl took the real life case of Werner Kniesek, who, having been released from prison after serving less than 8 years for an apparently motiveless attempted murder, immediately went on to commit three more murders. It sparked debate at the time, around the Austrian penal system and the appropriate way to treat dangerous schizophrenics - locking them up in a standard prison, rather than treating them in a specialist psychiatric unit, then releasing them into the community obviously wasn't the right approach. Kargl was interested in adding something to the debate with his film but was determined to make an unadorned, unsanitized account of events as a wake up call, shedding light on the real horror of Kniesek's actions during the home invasion that couldn't otherwise be felt by simply reading about the case in the papers. He wanted the film to have a visceral impact, and boy, does it ever.

Kargl wasn't about making a straightforward horror movie though. Teaming up with experimental cinematographer and filmmaker Zbig Rybczynski, they embarked on a project together to make something that pushed boundaries technically as well as in the narrative sense. Consequently, Angst is a film that was caught between a pillar and a post - too arty to appeal to the 80s horror crowd and too raw and brutal to appeal to the art house fraternity - which in part explains its commercial failure.

There's no real narrative arc or any kind of traditional three-act structure - instead, you are transplanted inside the head of 'K' (an acronym for Kniesek, though the detail of the story is actually taken from police interview transcripts with Peter Kürten, the so-called Vampire of Dusseldorf) and follow him on a crazed rampage, following his early release from prison. Everything he does is almost at random; his actions dictated by his overwhelming urge to kill. The film has an amazing energy, but a dark, negative energy and an unsympathetic protagonist, which makes it a tough sell. The closest parallel I can think of is the home invasion scene from A Clockwork Orange. The violence is sporadic and short-lived but brutal in the extreme. K lacks Alex's eloquence, but his manic energy is similar and the way the events of the film are narrated also reminded me of it. There's a strange counterpoint to the calmness of the voice-over and the frenzy K displays on screen. At one point the narrator simply says "I had lost control". And you believe it. Erwin Leder's performance is nothing short of a revelation - rarely have I seen anyone so successfully capture what it's like when rationality flies out of the window and blind murderous lust is in the driving seat; his deranged, rage-filled performance is difficult to watch but equally impossible to take your eyes off. It's something of a relief when the film ends and you can leave his head space. That, I think, is testament to the film's power: it almost feels like the closest you could get to actually experiencing the lust-crazed impulses of a serial killer, and that's frightening - especially when you find your morbid curiosity almost willing him on.

Zbig's influence is writ large over the camera work. From the opening crane shots of the prison, swooping elegantly down across the rooftops, you know this isn't going to be your typical genre flick. Visually, the film is experimental in the extreme. An ingenious harness was devised for rotating the camera around K as he moved, but always at the same fixed distance away from him, which gives the impression of him never being able to escape his own insane head space - and the viewer too: it's an incredibly claustrophobic experience. Complicated rope systems were used throughout shooting to get stunning aerial shots of the action below - cameras on ropes, high above the ground, stretched between trees in the wood scene and between telephone poles around the main house, where most of the action takes place. It was also innovative in that the whole thing was shot entirely through mirrors, in order to get some really unusual angles - apparently a technical and financial nightmare for the producers. The results are worth it though, as Angst has such a unique look. Klaus Schulze's pounding synth score is also a real treat for lovers of krautrock and early 80s synth music. I actually had the Angst OST before I ever saw the film.

Having seen it a number of times now, the first time being a really scuzzy VHS rip, it was great to finally see Angst in glorious high def, which Kargl and Rybczynski's art truly deserves. There was also the optional prologue, which I hadn't seen before and don't feel was strictly necessary but was an interesting way of fleshing out K's back story, docu-style. I highly recommend Cult Epics's region free blu ray transfer, which will hopefully continue the process of bringing this dark gem into the light.