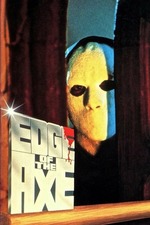 Edge of the Axe

A José Ramón Larraz joint, under the alias Joseph Braunstein. If I didn't know I'd never have guessed this was from the same guy that brought us transgressive gems like Vampyres a decade earlier. This is pretty much yer common or garden smalltown slasher. And Michael Myers wants his mask back.

On the plus side, the kills are pretty gnarly - and well-staged, although nothing tops that opening car wash kill: an axe smashes through the windscreen and several hacks later we're left with blood mingling with soapy suds as it runs down the side window. Things start with a bang and the killer goes on to rack up quite a bodycount. Unfortunately, the film's running on fumes whenever the killer is off screen, which is a lot of the time. Just a lot of unengaging characters, including Jim Carrey, sorry, 'Barton Faulks', in the lead role of Gerald, plus his dudebro sidekick Richard, who are referred to throughout as the town bikers despite neither of them owning a bike. Instead, they roll around in this dusty blue pickup supposedly working as exterminators but I never saw either of them get a paying gig. Gerald's more interested in beating his high score on Road Blaster while Richy leches around Lillian's older sister. Then there's the local sheriff, a lazy bastard who doesn't want to do any work. Severed pig's head on your bed you say? Not interested pal, call a vet. Corpse in the attic? Nothing to see here, saw up the body, bury it and we'll forget it ever happened. Girl slashed to hell near the train tracks - fell under a train carriage, case closed. Eventually, the bodies are stacking up so fast the lawman is reluctantly forced to start some kind of half-ass investigation that leads nowhere fast. Meanwhile the blood keeps flowing.

There are some nice period details in the stone washed denim, big hair and conspicuous Coca Cola product placement. There's also a fun sci-fi element in the computer system that Gerald rigs up so he and Lillian can chat remotely, accompanied by an echoey disembodied voice that repeats everything they type. Man, I wish I'd had one of these machines in 1988 - the damn thing is smarter than Mother. Electric Dreams baby.

The final twist isn't entirely predictable (although there are a few little clues scattered among the red herrings), but it's entirely implausible, for a number of reasons, the main one being 8-bit psychoanalysis. It's worth watching for the murder set pieces and the axe work, but not a whole lot else.