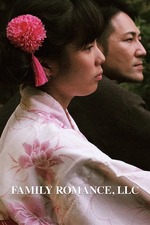 You'd be forgiven for thinking Werner Herzog's latest docudrama was pure mockumentary, but as far as I can tell from a quick Google search, Ishii Yuichi is a real guy and his rent-a-stranger business, Family Romance, is a going concern. The idea of renting out actors to play relatives or acquaintances in peoples' everyday lives - husbands, wives, fathers, co-workers etc - is bizarre on the face of it, but it's a real phenomena that also featured in the BBC's recent two-part travelogue, Japan with Sue Perkins. I was struck by the similarity between that and Herzog's film (basically the same setup, with a rental wife instead of a father, and the same robotic hotel attendants). I assume the similarities are coincidental, both just reflecting what's currently going on in the country. Other weird details, like uncannily realistic robotic fish (all the thrills and spills of fish ownership without the hassle of supervision) and the trend for hiring out coffins by the hour to experience what it might feel like to be dead, build a picture of a country obsessed with acting and role-playing, seemingly in preference to authentic experience.

It does seem very culturally specific, like something that could only be going on in Japan, preoccupied as it is with appearances and the idea of 'face' as a tangible commodity. The idea of Ishii's company representing a viable business model anywhere else in the world seems inconceivable. Herzog is wryly amused by it, but not overly judgemental - unlike some of his other documentaries, his distinctive sardonic tones are completely absent and the main suggestion of editorial input comes towards the end, where he attempts to find some kind of resolution to his strange narrative, probing the implications of literally living a lie (a multitude of lies) for Ishii. It's a scripted revelation, but then I'm sure the whole thing is scripted, with Ishii's willing participation in what he sees as just another gig maybe; his client, Herzog, needing to rent out an actor to play an actor. This is the only part of the film that feels a little forced, with Ishii being made to dwell on the consequences of playing Mihiro's estranged father, asking where the deception ends, if at all.

The film explores a kind of doublethink at the heart of the nation's psyche - observing the importance placed on others' perceptions and yet at the same time, exposing a fundamental lack of interest in anything beyond superficial interaction. It's highlighted by one particular scene in the cemetery, where a woman politely listens to Ishii's woes but is clearly looking for the first opportunity to flee a situation too emotionally real for comfort.

It's visually flat, with no great style, other than a few expansive drone shots, taking in the beauty of cherry trees in full bloom in Yoyogi Park and revealing a striking contrast of old and new: ancient, low-rise temples backed by the steel and glass skyline of modern Tokyo. The music is a delicate, wistful synthesis of strings and piano, contributing to a serene, gently surreal experience that knowingly blurs the boundary between fiction and reality.