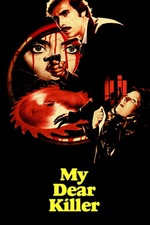 Solid giallo from a director perhaps better known for his spaghetti westerns, Tonino Valerii. It actually plays out more as procedure-heavy poliziotteschi for the most part but with nasty enough kills to remind you you're watching a giallo. There's other telltale clues - George Hilton, a trenchcoated and black gloved assassin, cut throat razor, a proliferation of unnecessary zooms and gratuitous nudity, but sadly not a drop of J&B in sight.

Unlike some other gialli from the golden era, our time is spent almost entirely in the company of the police working the case, led by Inspector Luca Peretti (Hilton). This means it's borders on dryness and although competently shot with a kind of rugged glamour reminiscent of spaghetti westerns, it lacks the the lurid visual appeal of the best of the genre. But there's an atmospheric jazz-inflected score from Ennio Morricone and enough inventiveness in the kills, the sinuosity of the plot and in Hilton's enjoyably gruff performance to push it into respectable territory.

You get the sense that Valerii didn't necessarily set out to make a giallo so much as a straight-up murder mystery / thriller that gathered up some popular tropes and rode into town on the yellow wave. The way that Peretti flirts with incompetence throughout, his team always a step behind the killer, only to turn super-sleuth at the end in an Agatha Christie style drawing room denouement seems to validate that suspicion. Not the strongest ending.