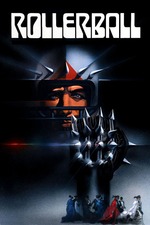 This film raises more questions than it answers. Why is it whenever there's a TV screen must there be three smaller TV screens above it? Why is there only one typeface for the entire world (a rough approximation of Letraset's Countdown)? At what point in the game is a new ball launched? What are the motorbikes for? It just seems so random. Why exactly do the shadowy cabal that run Houston's all conquering Rollberball team want star player Jonathan E to quit?

All of these questions and more are never really answered, though if you squint hard you can sort of read between the lines and deduce that the world has transitioned to some kind of ultra-regulated corporate-controlled future where Rollerball provides the only outlet for peoples' latent aggression. It's the opium of the masses in a world where wars no longer exist and dissent has been eradicated. How exactly this works is anyone's guess but I think the reason Houston suit Bartholomew and his puppet masters want Jon E gone is that he's become bigger than the game. What they know is that it's never been a game; it's a mass media device for keeping people hooked and docile - they get their fix from Rollberball and don't start any trouble. But they also need to be reminded that the individual means nothing - they must be made to see that Jon E is as disposable as the next guy; keep 'em scared, keep 'em line. None of this is really made clear though so I may be completely off base.

The biggest problem with the movie is that when it's not focusing on R-Ball action, it's being really fucking boring. And borderline inscrutable. Everyone mumbles (no-one more than Caan), there are endless scenes that serve no real purpose in terms of moving the story forward (you could easily slash half an hour from its bloated two hour runtime and actually improve it). Lead James Caan, as Jonathan E, seems to be hell bent on delivering his lines with the most economic mouth movement ever; I can only assume the director Norman Jewison's coaching went along the lines of 'play the guy like a ventriloquist without the dummy'. He's so low energy, and honestly, that brings down the rest of the film, it just drags so. fuckin. much. For a film called Rollerball, there's not nearly enough, y'know, Rollberball. Instead we're treated to a series of scenes of Caan having mumbled conversations in a variety of settings, from his own ranch (where every room has the obligatory 4 screen setup) to an awful upper crust party where guests take a break from the loose funk and boring chit-chat to incinerate a line of trees in the back garden. The copse violators. Still, nothing like a bit of localized deforestation to liven up a party.

On the plus side there's a lot of fantastically improbable 70s retro future architecture to feast your eyes on and pleasingly, every seat back is on at least a 45° incline, leading to preposterously uncomfortable mumbled conversations. The highlight of these recumbent interlocutions occurs between E and Bartholomew when the latter informs him he has to quit, but not before he's made them both sit in silence together for a minute beforehand. The two chairs are positioned in the centre of a white room, empty except for a forest of hanging glass shards in a circle around the two chairs. E cuts his hand on the glass before taking his seat. It's like something out of Jam. The computer centre where E goes (I think) to try to solve the mystery of his retirement is equally surreal. Huge banks of computers line the walls and the customary uniform of your average programmer is a lab coat (bring back those days I say!) E meets the head 'librarian' but gleans little useful info. The librarian spends most of the time banging on about the 13th Century.

You'll have noticed I haven't spent much time talking about the game at the heart of it all, and that's because a/ it really doesn't feature that much and b/ when it does, it's kinda disappointing - I had been hoping for an explosive real life precursor to one of the loves of my childhood, Speedball II: Brutal Deluxe, but tbh that shit was about 10x more exciting. The first game is very tame. The Tokyo match-up raises the stakes but Moonpie's Goose moment is telegraphed a mile off. Even the last game of the series, the final against New York, where the rules of the game have been changed to ensure maximum bloodshed (unlimited game time = last man standing) is a bit underwhelming. It seems like Caan is about to get his Spartacus moment at the end, and I was fully expecting him to climb over the barrier to confront Bartholomew but instead we just get a laughable freeze frame of his face which zooms in thrice so we're just left with a blurred image of his confused eyes as that terrible organ music plays us out. It's reminiscent of the day Kilroy lost his mind.

I don't really understand why this film gets such an easy pass. Its social satire is muddled and borderline incomprehensible, it's overlong, dull af for long stretches and the acting is pretty ropy. It's only saved by the (relatively) exciting Rollerball sequences but there's not enough of that and too much turgid drama. I love Arrow as much as the next guy or gal but sometimes their choice of releases baffles me.