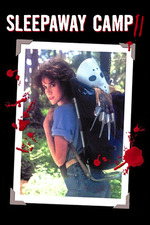 Mare: What are you looking for? A gun?
Angela: No, a drill
Me: I’m done *dies laughing*
That scene was executed to perfection.

This franchise took a huge ass left turn here with this installment. They really didn’t waste any time to start the killings. I kind of wished they kept the same actress who played Angels in the first one, but the actress who played her in this one played a complete psycho version of the character so well.

Everywhere you looked in this movie you either saw boobs, you either see Angela say “ Uncle John is going to hear about this”, or some sadistic-fucked up kills, and I was all for it. The outhouse kill was probably the most “I don’t give a flying fuck about you” type kill I’ve ever seen in a movie. I could only imagine people seeing that scene in the theaters and just hearing people be like “Fuck me dude”.

This is was a solid sequel. I feel like it plays off the first movie extremely well. So far, I’m not with the group of people who says these films get worse as you keep watching, but I honestly feel like the sequel is a tad bit better than the original. The sequel had a different direction as the first movie had, so they both were good in their own ways.

That ending though. I’m guessing I’m about to get a fucked up ending for the third one; who knows though.