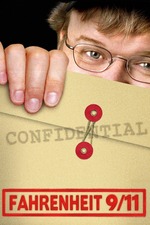 Despite the massive amounts of controversy spawned by and arguments of inaccuracies directed at this film, it's nonetheless a remarkable motion picture. Even setting aside its scathing indictment of corruption and ignorance in the Bush administration, Fahrenheit 9/11 is a powerful, focused, and very well-made piece of film. Not only does it deal heavily in the aforementioned (and very important) mistakes of the American government, it becomes a damning statement on poverty and war itself; there's some very emotional stuff in here, and it's clear Moore has a measurable amount of respect for these people. It never truly derides into vitriol but, instead, pinpoints factual evidence and interviews to support its ripping views.

One of my favorite quotes from the film was actually not a product of an interview or narration but, rather, the excerpt read at the end of the film from one of my favorite books of all time 1984, by George Orwell.

"It's not a matter of whether the war is not real, or if it is, Victory is not possible. The war is not meant to be won, it is meant to be continuous. Hierarchical society is only possible on the basis of poverty and ignorance. This new version is the past and no different past can ever have existed. In principle the war effort is always planned to keep society on the brink of starvation. The war is waged by the ruling group against its own subjects and its object is not the victory over either Eurasia or East Asia but to keep the very structure of society intact."

I think that about sums it up.