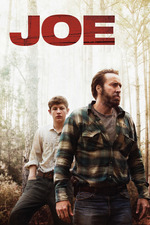 I'm glad to see David Gordon Green and Nicholas Cage back on track. Joe is an impressive film; a blend of coming-of-age themes and an engrossing redemption story, portrayed perfectly through the director's gritty and realistic lens. The acting, from the entire cast, is superb - right down to the bit players. Of course, the main heap of praise has gone (rightfully so) to the actors playing the three principal characters: Nicholas Cage, Tye Sheridan, and the late Gary Poulter who, sadly, died before the film was released. I'd pinpoint Cage for the best performance, personally, but all three are excellent in their own right. Poulter especially added to the realism at play; he was actually a homeless man with a drinking problem. The story of his involvement is almost as fascinating as the film he managed to star in.

Say what you will about Green, but when he picks a good project, he does is right. He especially good at creating a distinct and realistic atmosphere - and it's especially evident in Joe. Basically every element of the film is markedly accomplished. The editing is brilliant and, when coupled with the subtle, brooding score, makes some scenes feel extraordinary. The atmosphere is almost palpable, and the film is an engrossing experience.

Another impressive 2014 release. I hope the rest of the year can produce some films as good as some of the stuff we've seen already. Don't miss this one.