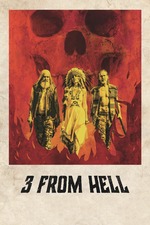 I'm not the biggest Rob Zombie fan. Never listened to his music or anything. So I judge him based on his films alone. As far as his films are concerned he's a mixed bag for me.

I loved Devil's Rejects and Halloween. Liked El Superbeasto. Thought House of 1000 Corpses and 31 were letdowns but still worth a watch. Absolutely hated Lords of Salem and Halloween 2.

Since 3 from Hell was touted as a sequel to Devil's Rejects I was all in. Watched it last weekend with a few friends and was never really invested. Decided to watch it again today alone and I see why I wasn't invested. The characters have no motive. There's no plot to follow. They just stab n shot a bunch of ppl along the way. Just pointless overall.

Wish they would've let Richard Brake reprise his role as Doomhead and turn on Baby n Otis or something.