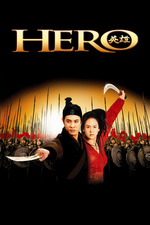 Is the sword the only answer?

The grand hallway is vast and gray, with massive, intricately carved pillars standing guard on each side of the room. At the far side of the room, a figure sits pensively behind rows of symbolic guardians holding a wall of flame as protection against the presence of evil. The atmosphere is imposing and oppressive, as a nameless protagonist stands dwarfed by his surroundings. Defined by empty space and defensive theatrics, the arrogant King of Qin soliloquizes profound ideologies of peace while living petrified of death, the reality of his actions looming grimly over his shoulder. But to fully understand the gravity of the scene playing out before us, we move back in time, and a deft hand wielding a brush soaked in vibrant ink begins to paint a stunning picture of each moment leading to this one.

For the next 90 minutes, Zhang Yimou's Hero becomes one of the most stunning pieces of cinema ever crafted. Rain soaked courtyards host ballet dances of sword and spear while plucked strings set ethereal atmosphere. A lone but picturesque school sits in the middle of a wind-swept desert, crimson blood spills in the courtyard while blood-red ink dances onto parchment in symphonic harmony, a tense tale of searing lust and burning love creating a whirlwind of violent jealousy and aggression. In a peaceful cerulean space minds meet, a sword deftly cuts through the air with lightning speed, incredible precision meeting unmatched technique, love and lust now a somber, melancholic echo as swords clash above still, reflective waters. But despite the many theatrics and immaculately crafted stories, we still have not arrived at the truth, as singular perception and obfuscated goals warp reality to serve each individual.

Truth, severed from elaborate embellishment and decadent illustration, becomes unencumbered by vibrant mystique, cold and unfeeling. The richness of the storytelling combined with Christopher Doyle's incredible visuals crafts such an intricately woven masterpiece, but the final act's culminating message is poison to its previous perfection, a frustrating nationalistic message that supports oppressive regimes and violent conquest while positioning it all in the name of peace. The core that it uses to push this message is easy to view as admirable, the concept of a swordsman's ultimate ideal being to lay that sword down is nothing if not poetic and poignant, but the larger ideals it represents are dangerous. The ultimate ideal of Hero is not in its grandly postured message of quiet peace and theatrical martyrdom, but in its subsurface concept that imperialism and oppression is all for the greater good. The cinematic contradiction between its beauty and messaging is troubling to say the least, but the sheer power of its visuals and the technique of it all remains impactfully stunning.