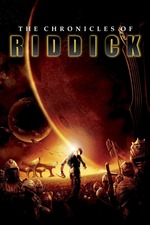 The Chronicles of Riddick

Well this is… Weird. I’ve unfortunately not seen the first Riddick-movie - Pitch Black - so stuff like a man suddenly ripping people’s souls out for no apparent reason is maybe explained better there, but The Chronicles of Riddick is still overall a very weird sci-fi movie. What The Chronicles of Riddick is too, is silly. It’s not the most ridiculous sci-fi I’ve seen but lands somewhere between Battlefield Earth and the Star Wars-movies.

This movie is filled with dudes in weird hats, big thrones, silly names and pompous design and well, if you like that this movie is probably perfect. I’m more doubtful about stuff like that and there’s just a bit too much to take anything really seriously here. Still, even if the creature-design isn’t much to write home about there’s some ambiguous sets with a great range – so The Chronicles of Riddick makes sure you always have something fascinating to look at.

Speaking of visuals to look at, the action scenes are also kind of uneven. In itself it’s potentially awesome and when they’re showing Riddicks point-of-view by becoming very hastily edited it’s slick and stylish. The problem is that every action scene is blurry like that, it wears thin very fast and makes the otherwise pretty cool shootouts and butt-kicking feel mediocre at times.

We’re lucky that we have Vin Diesel though. His acting range is pretty limited, but just like another narrow actor like Keanu Reeves he does fit great as the silent cool hero. His Mad Max-personality and surrounding events may be things we’ve seen a million times before – but Diesel is just 50 shades of cool and has such a great deal of one-liners that it really works. And to be honest, I doubt this movie would’ve worked at all without Diesel.

The Chronicles of Riddick is a standard sci-fi story with a brewing pot of every possible influence, but all the ingredients are here because they have something that works. It’s hard to find any big flaws in the plot and just as little that truly engages and that’s kind of telling for the entire movie. It’s cool, somewhat interesting-looking and often fun sci-fi action that serves it’s 2 hours well, as long as nothing more is expected from it.