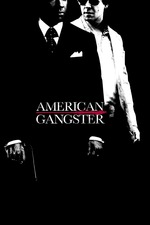 “When you think about it they’re both right, and that really makes it dramatic; when both people have beliefs and then you have them come head-to-head,” -Spike Lee

A through and through cop/criminal gangster “based on a true story” flick with premium swagger from a director, hell even era whose since it seems has forgotten how to do this shit, well, like maybe up until last year with The Irishman, but even then it’s no surprise that film was written by the same guy as well, both films I would argue actually bettering themselves with the improved technology and perspective of the 21 century rather, like here maybe better example of getting the perfect version of A Most Violent Year sort of, then just ending up as they probably had every right to, as something sorely wishing it had been conceived of way back in the 80s or 90s.

I mean, I kid you not when I say that not just in premise but maybe doubly so in execution American Gangster delivers an expertly cut pie of Scarface meets Heat (with a fine slice of Spielberg circa Munich era thrown in for good measure), especially I would say exemplified in the way it plays with its leads even if they don’t immediately promise De Niro, Pacino level raw untamed acting superpower energy (and man, the all star supporting cast is an even bigger surprise, maybe one of the best ever assembled since Wes Anderson started doing his whole thing), in short somehow a film still reading as 100% pure manic, riveting cinema even after all the Ridley Scott genre splice work (we didn’t avoid a scene of a gangster trying to bribe someone with a microwave though, seems like a sort of common theme in these films), which to another point I almost have half a mind to say this is actually Tony’s film that he let Ridley slap his name on in the post credits because seriously where did something like this even come from (but then again at the same time there is a diligence here that is distinctly Ridley, usually for worse, dragging out something like Alien to cartoonish build-ups with no payoff left that I would care about at that point and on the other end not having I would say enough of a filter on for a decent amount of Blade Runner’s wacky monotony, but this, hell, not only is it the Goldilocks zone in terms of pacing and gritty world building, and though the comparison is pretty general, it’s maybe the best paced film of all damn time).

And well, I guess to a degree that some other drug ring-type films directly tackle different addict politics but that still doesn’t really take away from how dynamically the Nixon era war on drugs and war in Vietnam are tied or more accurately I should say juxtaposed into the fibers of the plot here. I mean, yeah there also are some pretty cringe uses of theme here as well, mostly with the way they decide the last third of the film has to address the idea of Denzel rising to infamy as a black gangster, a lot of ideas that aside from how unsubtle they are (literally Roger Bart yelling at the camera) might have been more appropriately addressed during Frank Lucas’ come up, even admitted if that does taint the magic of his puppetry a little.

Though if we do want to talk about bad dialogue in general, and there is a fair bit of it, interestingly enough Zaillian’s screenplay actually sort of ends up using what would otherwise be just corny throwaway lines as this sort of foreboding Trojan horse technique employed anytime someone is lying to Frank or oftentimes also Ritchie, like take for example all the sweaty, nervous and just clearly terrible lines we get from Ritchie’s partner at the start of the film, especially anytime anyone brings up corrupt cops or junkies, I mean at least I like to think that was done to cast an intentional and palpable sense of being high-strung over the scene, and maybe even better the dialogue’s sheer being memorably bad makes you go over it in your head a lot and question as to what it was that created that idea in the first place (now narratively there is some bad writing without any snake oil justification, mostly in terms of how we get at least ten scenes showing how badass and pure “don’t fuck with me” evil Frank is and that is a bit excessive, like hell that’s the first scene, him lighting someone on fire with no context or purpose to anything else so I can see an issue from that angle).

Regardless though, if this were a film by Scorsese it would be his best film, De Palma, Mann, Coppola, the same thing, now I guess all I have to do is decide if it’s one of my favorite films and see how well it holds up on a re-watch, but the short answer is hell yes. My man...