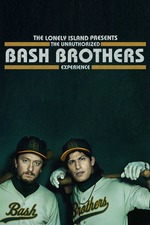 I mean, uh, I don’t really know what I’m supposed to say here, The Lonely Island have always felt very reminiscent aesthetically to a band like Queen or something, universally loved and championed as pioneers of their field, a group I won’t deny with a clear amount creative power coming off their every output and yet it’s just one of those things I have never gotten for all my efforts, and frankly considering the amount of time I’ve spent trying to increase my liking for either group, well, there are just other places where I can get a source of maybe a little more ironic raunchy sex satire that ties together an actual premise along with it, and doubly if I want to hear people syncopate the sound of pots and pans banging together with a chipmunk vocal I’m sure there are other places I can get that too,... mainly the LSD, rager, nightclub scene if we’re honest (it's a very different time since Queen to say the least).

But specifically I balk at even calling anything The Lonely Island have done as comprehensive “satire” anyhow, least of all this considering the style is mostly in tune with their usually focus of making shorts, films, music selections all with no identifiable motif or even a seeming source for spoofery beyond like maybe ‘I’m on a Boat’, but that has the other issue of falling within the lower percentile of effort they have ever put into a joke, maybe the point, maybe not, simply not being funny is at least my point, because seriously why is an obscure, discrete 80s baseball duo being used to take some semblance of, a murky at best, piss at like actually weighty topics like daddy issues, drug use, and as put best by Billboard, however they spun it into the positive saying “Major League Baseball having a baby with “The Tree of Life” and “Lemonade”, and while I might personally extend those comparisons to Aronofsky’s The Fountain as well (not really that important considering the way everything is edited for sound and visuals it more comes off as an even more hazy jab at the state of the movie trailer industry or modern music scene than film specifically or at all, which I’m almost certain they weren’t going for based on it having maybe even less cohesion but who knows really) the main issue is that for me at least when it seems the only real joke you have up your sleeve other than boner serenading is that something this weird and useless exists and is out there for mainstream consumption, in that case it’s pretty bleak to say the last. Heck, I’ve often seen this special described as a fever dream (and in their own words Lonely Island ironically call it a visual poem of sorts, which seems about right for how cryptic and pretentious the final product is, to be honest) and in both respects, people were not fucking kidding.

I mean, very bottom line the style of comedy employed here (or lack thereof) is often nothing without some visual flair and in that corner there was at least an effort put forth to spice up a lot of useless shit with extreme angles, sped up motion, exaggerated colors and wild camera movement, basically looking like a schizophrenic Travis Scott rap video taken back to the 90s-2000s MTV explosion (explicitly cited as having deep-rooted Hype Williams influences which I can totally see as well), in particular the sendoff ‘Let’s Bash’ musical number is actually quite spectacular (that MLB team verse is totally worth the reputation it has garnered, but also it's like on thelonelyisland YouTube so just watch it there I would say) in addition to having of all the video sections the first effective flow lyrically thanks to Samberg and Schaffer’s uniquely Vanilla Ice, yet deprecating musicality they chose to pull out late (in general the songs are still the best part of the whole thing by far, but I won’t lie as they are still pretty hit or miss, split perfectly down the middle of bonafide Lonely Island bops and just bafflingly stupid attempts at wit and brag rap parody) but, well, as much as I thought or more just hoped this wouldn’t be the case on account of how much some clips and tracks uploaded to YouTube are enjoyable that small, comedically digestible quantity (mainly that they tease that the longer film will actually have jokes built on a lot of what you see, sadly I was wrong on that one), sort of in every way the film really is not, eventually even the art style, while never drying of new ideas per se, becomes rather flat just from how much it mixes with the touch and go I guess you could say “plot” of Bash Brothers, rendering everything, even in that creativity just a really muted dull roar of swirling browns and white noise that inches by far too slowly for what is literally a half hour Netflix special, something I would mostly chock up to how, granted as much as the editing and asymmetry is fascinating from a style or aesthetic perspective, given a lot of the things the film also tries to emulate or mock through purely its visuals they’re in the end maybe the most self-absorbed and autofellatious part of the whole thing artistically (once again maybe the point, though making the Bash Brothers out to be these trash pretentious rap artisans isn't much a joke at all and if there is a better one it wasn't defined nearly as well as it could have been is all I'm saying).

So yeah I guess I’ll just resign myself a life of missing out on some serious indie comedy gold or whatever, though for all my jabs I am pretty disappointed that I didn’t get more out of this, like the thing looks and sounds great and really should be watched on the biggest screen possible, it’s also no doubt one of the most interesting things Netflix has done in-house in a while, there’s plenty of quirky celebrity cameos, and even Mike Diva seems like a genuinely cool guy, but whatever. Anyhow, below is my ranking of the songs and their accompanying videos by focus on creativity and “fun”, if anyone cares: