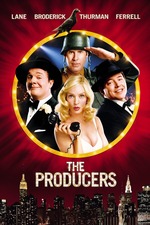 So forget The Disaster Artist, this is what the production of The Room really was like, huh. And wait a second is it like explicitly a part of Nathan Lane’s movie contract that his first appearance in every film has to be someone coming into the room where he is and startling him while he’s cowering under a mountain of blankets and newspapers. Or on the other hand, it’s that he only does, rather, is contractually allowed to be good in remakes of or productions of classic screwball musicals? Well damn, I mean I’m not complaining; he is fairly good in this, well actually to some extent I am, if we’re rattling off our wishes I gotta say, it would be nice if Will Ferrell wasn’t here, well yeah in the sense of at all, sure, but on a more gracious note, it almost feels like his character is better suited for something like Jojo Rabbit than being haphazardly slotted in here as a bit of unwarranted, or just unneeded politics/provocation to the end of doing there own little animalistic Nazi satire.

And I don’t know with a little more nuance, or just consistency with its world or rules and such in the sense so much of the film is inevitably rendered morally unintelligible for strictly the sake of screenwriting convenience, this could probably end up landing itself a place within my Top 5 favorite musicals or something, yeah, but as it is not only is there excessive random (screaming and as much noise, slapstick, violence as possible)=funny energy (not any better mind you when they try to shroud the stale punchlines in even more forceful bouts of melodrama and a self aware, deprecating quirkiness that I really think only a Gene Wilder type should even try to attempt), while yes, that of a style still written by Mel Brooks but it’s nonetheless clear he just phones this one in pretty hard given he’s already made the masterpiece, or at least it seems so given how much potential is behind every dead-end idea here to the point I was almost tempted to turn off Netflix and go rent the 1967 version because seeing such simple, yet entertaining concepts shit all over could probably be a torture method in and of itself, and well also here we have a cast, particularly, kind of a shocker, Matthew Broderick and well I didn’t have any expectations for Uma Thurman but that scenario ended up actually worse than I had the imagination to try and grasp, both of who pull off the humor even worse and with less flair than it’s strictly written on the page.

Like I said I just really like Nathan Lane so there’s a good chance I am turning a pretty blind eye to his similar shortcomings here but I can’t help but love a role giving him a chance to be self-aware himself and be the one dishing out insult humor and not be the receiver which is almost made more interesting considering he actually plays Bialystock and yet if anyone his performance is the most reminiscent of Wilder with all his little pantomime, mouthing, and reactions, also just the general tempo at which his character moves might as well be some sort of Wonka homage, but that aside his more dramatic chops are also on display here, to no or a pretty terrible end really given the stupid shit they have him singing and getting all teary-eyed about but I guess it is still something.

I mean, like at this point for how long this movie drags itself out, and I do mean drags in the utmost sense, the two stars are actually pretty gracious, especially factoring in while I know the whole premise isn’t without its charms it’s like a really gross display of period-accurate glorified industry misogyny with some equally misplaced off branching scenes entirely dedicated to a couple underhanded homophobic jokes (pretty awkward with Lane in the room being the one to do it too), just in general like every character’s role in the plot is seemingly reverse engineered from how their very basic traits and labels as a human can be exploited for the quickest laugh, not really taking any consideration to caution how equally fast each lead just becomes that one joke in the process (like seriously what the actual fuck was the old lady prostitute humor doing here, like I don’t know how else to say it that just had me way too creeped out), I mean the biggest crime of all there being that it just isn’t funny to be honest, and sure The Producers is meant to be a satire, kind of a confusing thought in fairness considering it is mostly an attack on the media consumer who can fall for garbage actually very similar to this in the physical, just generally things marketing itself as witty sarcasm that are actually the tasteless work of hacks, and pretty against point to some level wants you to empathize with the scumbag criminal producers and care who betrayed who and find triumph in their friendship, like I was on board for something that cleverly discusses the greedy male ego of creative higher ups in a degrading way, but not whatever thematic train wreck we end up with (but to clarify and be perfectly fair there is a bit of quaint obscurity given to the more controversial areas so maybe I wasn’t offended entirely, just see it as a poor screenwriting cop-out).

But hell, it really is no accident, this feels like an ego storm satire made by Hollywood producers of the film themselves (like they didn’t even try to get an experienced director for this, sure, in some respects the fact she has a mostly theater background on paper seems promising for the music numbers in particular but actually the ensuing product is more along the lines of those really awkward identity crisis moments from Chicago 2002 where there are basically just putting on a Broadway musical and filming it with some intimate angles, because hey, movie am I right, oh and double movie let’s CG in some birds doing a Hitler Salute right, that’s funny, right) that are just covering up their weird kind of horny cinematic confessions, like haha, we’re cool right, indirectly only we can laugh at ourselves and our own manipulative egos, oh well, you know except also like we actually do all this illegal stuff and are very very unironically cool for it so ha ha ha ha ha ha!!

I mean, okay no, this definitely isn’t the most offensive way to spend a still mind-blowing 130 minutes, but like maybe if anything the Elizabeth middle name joke would have to be it for something I remembered as being actively funny and that says almost as much, hell, this felt pretty reminiscent of when I will watch something dumb and fun with my extended family full of five-year-olds and like obviously it’s going to be a piece of shit and whatever right, but here this is directly meant to have all the complexities of a raunchy comedy mixed with musical and satire which was simply far too much to juggle comparative to how much it seems they tried.

Yeah, the songs are fine and in themselves probably the closest thing to nailing the funny half-breed of Chicago, 42nd Street, and the ridicule of both genres and subsequent conventions they were going for, but huh, I wonder if that’s because they literally inherited them from the original, imagine that. And sadly also as much as I said I want to get around to watching The Producers from ‘67 this story is yet one of those with a painful amount of fatigue and bloat within its runtime kind of no matter what the quality it seems, so while I can only imagine what a re-watch would look like or what this story would be done right, oddly yeah, I get the feeling I don’t ever need it told to me again even if in a more classy Mel Brooks style. Not going to lie, this will be making my Day Ruiners list at some point because sometimes a movie just is really that bad even in the most conventional sense.