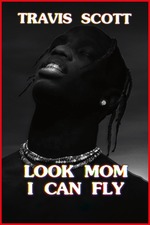 So actually believe it or not, yes, this is the second time I’ve watched, or I guess at the liberty of saying “tried to watch” Travis Scott’s Netflix spotlight documentary and I have to say it is marginally better than something like this should be, even if my feelings for it drastically ebb and flow enough that I can define everything positive I feel towards the film as just being all in comparison to the experience of binging footage of wild Travis concerts and then just deciding that watching this is a more productive version of doing that and inevitably I pop it back on, but all that to say as kind of a Scott fan, or at least a fan of his ethos and the general insanity that follows him around (funny side-note though considering the so called “king of rage” is the same guy that makes music to the end of personifying the feeling of zoning out on designer drugs surrounded by your rich friends, and I mean the more I watch of his concerts too, the more awkward it becomes that like beat drops are added to his music in places that were honestly pretty mellow on the actual record seemingly only for the sake of having this big moment with the smoke effects and the stage diving for everyone to “get turnt”etc, and eh, it’s fine I guess, sure, everyone is doing it in trap music these days no less, but still yet makes the whole part of Travis this film specifically is supposed to be selling to me as intimate and raw appear even more of a synthetic product than his whole image did even upon signing major deals with Fortnite and McDonalds, basically I have to believe that this film is giving me a portrait of the Travis no one else has seen outside of it, and by the end I still feel like I know him even less as an actual guy just because of the way it all feels like image preserving deflectors and redirects) I guess the re-watch was oddly more rewarding than my first go around with ‘Look Mom I Can Fly’, even that is when equally revealing.

I mean I don’t need to use nearly that many words to explain the appeal here though, in fact, it’s just essentially a lot of pretty, at its best this darkly ethereal mix of b-roll accompanying I guess one could say special look at Travis’ concert antics along the production of Astroworld as well as on his ‘Birds Eye View’ and ‘Wish You Were Here’ tours in promotion of both that album and Birds in the Trap, oddly culminating in maybe one of the more interesting cultural events of the last few years in that of Travis’ self-made Astroworld music festival as well as his controversial Super Bowl appearance, and yeah so maybe the biggest problem with all that is just how pretentious everything comes off here in terms of how much of a master artistically the man supposedly is (like come on, I am still of the camp that sees Travis as a smart enough producer and curator of interesting supporting talent and a general positive marketing image, but none of those qualities are exactly the most compelling or easy thing for a whole documentary to be devoted to cinematically so instead we get a lot of awkward, I can’t help feel menacing mafia-esque scenes of like twenty or so dudes aggressively nodding their heads along to unfinished Astroworld tracks, talking in a very forced candid sense about how great of a creator Travis is, all this while we hear a lot of pretty standard trap music play in the background and you just get the odd sense that there is a gun pointed to these guy’s heads off camera and you just can’t see it because it really is all a bunch off group masturbation fluff even from someone who generally likes the music Scott makes).

So okay, maybe I was expecting a little much in the way of storytelling here, but when the artist you are spotlighting has literally released an LP that can from a certain perspective be read as a concept album devoted to chronicling his disappearance into the hazy, vice-filled, drug and sex addled rabbit hole of success where the strung out, cerebrally fatigued Hollywood nights begin to cynically take on no meaning whatsoever, that juxtaposed to the life he initially lived in his humble, root-sier Texas origins (something they try to do with the actual filmmaking a lot as well, like mirroring especially Travis’ recently born little girl Stormi to Travis as a starry-eyed kid, but in the end unlike some of his better records the actual documentary version of that effect is pretty pointless I would say considering I genuinely have seen this thing twice now and there is no identifiable reason for any of it to be here beyond maybe some sort of salute to Travis being a self-made millionaire, but even then, that wasn’t the initial conception at least I thought using this style was supposed to transition into so it might possibly look even worse if they weren’t so much going for a sort of cinematic ‘Rodeo’ experience anyhow) not to mention all that being generally a theme that has populated every single one of his subsequent studio albums, I do become skeptical when somehow the documentary that followed that same guy around every day for maybe the most interesting year or so cross-section of his professional career is ridiculous in it’s sluggish pace and conventionally boring approach to the Travis lifestyle, that frankly feels all like one more punch up of his marketing team to craft an innocuous image for the artist whose biggest conflict here is “oh, man I didn’t win a Grammy, boo-hoo”.

And, mind you, it was by no mistake when I say something best described “conventionally boring” is generally the stench that glides over ‘Look Mom I Can Fly’ because as much as it seems every other negative opinion I’ve seen expressed about the film is to the conclusion that the very lack of narrative structure to what happens is what inevitably causes the runtime to overflow with vapid egotism and the extent of a 90 minute Travis Scott world tour edit set ‘Butterfly Effect’ (not really that important but a track far from being exactly the most emotionally rousing thing Scott’s made, which surely deadens things a bit as well) rather than the promised insight into the chaos behind the scenes of modern hip hop, because, I’ll be fair, to give the benefit of the doubt it does seem they wanted to make a genuine tribute to Travis and his creativity, just never really stayed with one thought long enough to feel that way, but, well, I actually find the issue to be directly the opposite, what sinks the doc is not that it lacks organization, it is more that ‘Look Mom I Can Fly’ is perfectly structured as a narrative, just with a really out of place for some reason plain to read three act structure, or at the very least if not taken to that extreme a typical screenwriting progression of conflict (like maybe it really is just me but the whole Grammy thing leading into a dark period for Travis or whatever and then going from that to the key to the city award from the Mayor of Houston is such a big part of the “plot” and themes here that it reads painfully like an over-orchestrated climax, rapidly thickening the layer of delegitimizing bullshit that this already distinctly stunk from, and that’s only really one example) whose reliance on the definite resolutions of events no less distracts immensely from that same sense of spontaneity and intimacy from Travis that, let’s face it is really the only reason anyone, fan or cynic alike is even here in the first place.

Alright though, so we’ve established that Travis’ Astroworld album is if only barely this masterpiece itself (well, from my perspective at least but whatever), and yeah in such a case the documentary logically won’t be some A24 Amy either, but hell, from a production standpoint this isn’t even well-matched with a much more earned comparison in that of how it stacks up to Miss Americana from early this year. It should, it should blow that film out of the water, both are pretty much meant to be the same thing just for two different artists and styles, both produced by Netflix, sub 90 minutes and the whole nine yards, and yet as much as the Taylor Swift film is still from a story perspective even more devoid of real conflict for the sake of being a massive back patting for the artist in question, at least that film was consistently visually interesting and had what can be at the very least mistaken for a voice, at it’s most pointless like with Taylor writing some corny Dear Diary shit in her childhood bedroom the idea was captured in a cinematically inspired way is all I’m saying, but here the personality is so paved over or just nonexistent, once again weird choice really for maybe the most exotic and creative hip hop performer alive, but anyway things are maybe more than banal artistically here, while even I wasn’t expecting jack shit from Netflix on that angle, well, to be honest we still somehow either get admittedly awesome eye-candy rager porn, or the much worse alternative where, considering this time I mistakenly watched the thing on a computer screen compared to last time where I was pressed for time and ended up having to use my cracked iPhone 7 which was far from a good vessel at judging things like filmic appeal, etc, everything else feels like, even for a low budget documentary it was specifically curated to look horrible on anything more capable than an iPod touch.

And, well, in complete fairness with all that said inexplicably I might find myself in the mood to watch this again sometime and I’m not even mad at the possibility. It’s a film for when you are so high out of your mind that there’s really nothing else that can channel “the vibe” better, and maybe through that lens, it can look like an actual masterpiece, although actually, I would wager a strong enough drug for that does not yet exist. In short though, if the Astroworld LP already wasn’t the most Travis thing to ever exist, then for all it’s warts this is definitely the runner up, even when in some sort of backhandedly insulting way. For this life he cannot change, indeed.