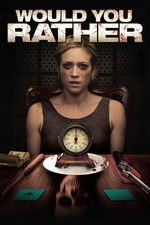 First off, I didn't read the plot or watch the trailer before watching this film so I had no idea what will happen. I just expected that it'll give off some Truth or Dare film vibe where some supernatural shit playing with them. But boy, i'm wrong. It's like Saw in a dining room which makes it "so-so" worst.

Yeah, you know who will survive at the film from the very start because— come on, it's movie. THE MAIN CHARACTER WOULD LIVE AT THE END! We're all expecting that.

Second, full of plot holes. Like, the doctor. What happen at the past? Why did he came at that place? To save Brittany Snow (Sorry I forgot the name of her character) because he made the wrong choice to invite her? I'm pretty sure he won last time like what Snow did— killed the opponent. Though when i'm in her position, I would honestly do it too. I don't even know him so fuck him. This is a game of survival, not a game of mercy.

And yeah the twist at the ending? It's depressing really that all she've been up to, go to waste because of that. But don't worry because she got loads of money and yeah— loads of money.

Overall, this film would have been better if things doesn't messed up. The actors are good, the acting, the plot. The only way this film messes up because of what I did mentioned above.