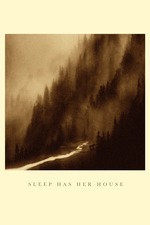 The rush of the trees, the terror of the Earth. Time is distorted and disrupted by the current, booming and roaring, threatening to end the eternal tranquil atmosphere that encompassed the environment until this moment. The disturbances begin only sporadically - sudden warnings against its foe - but as Barley's film presses on these disturbances become more and more frequent, constantly attempting to overpower the senses with its furious, almost primal nature. In this world, humans are (almost?) devoid, and yet their presence is still felt (and seen?) by their indiscernible sillhouettes along the frames; at the end of rivers, in the corners of trees. Perhaps humans in Barley's world are no longer humans of the traditional sense; they are supernatural, metaphysical beings, capable of feats unimaginable. Perhaps those beings are the ones causing the roaring attacks, eventually taking over the Earth with its final attack - a deafening strike upon the world, throwing nature off balance, and then restoring peace, after the natural elements have surrendered to this supernatural force. Sleep Has Her House.