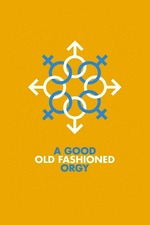 Now I know a lot people probably see the cast list and say fuck that. It's a perfectly natural reaction to former SNL members, girls who look vaguely familiar, and guys who were in that thing. I mean when Jason Sudeikis is your star you can't expect much right? Well nowadays when it comes to raunchy comedies I feel I just judge them on the did I laugh factor. There's no denying this film is poorly written, sloppy, and uneven but I did laugh. Several times actually, and really hard on a scene involving a toe cramp during sex because fuck I've been there man.

A Good Old Fashioned Orgy is a film that was stupid when the idea was conceived, but all I wanted to do is laugh and I did. The odds of anybody involved with this film winning any major acting awards is slim to none, but I wouldn't say I have an issue with any one of them. They're all fine for what they do, even if it is average comedies. I think most people will probably hate it, but if you find the occasional SNL skit funny or didn't think a film like We're the Millers was bad give it a go. Laughing at a stupid comedy never hurt anybody.