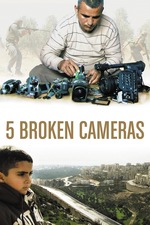 In this Oscar nominated documentary, Emad Burnat, a Palestinian farmer chronicles the nonviolent resistance to the actions of the Israeli army. The people of Bil'in, a West Bank village just want to protect their land from encroaching Israeli settlements, but their nonviolent demonstrations are met with teargas, arrests, and worse. Through the use of 5 different cameras (all of which end up broken) Emad documents the efforts of the resistance.

Documentaries like this are so frustrating. The fact they need to exist is very disheartening. The villagers in Bil'in are forced to fight for something so basic as their own land. Big corporations want to take it for profit and soldiers are put up against poor, nonviolent, and unarmed civilians. It's sad and pathetic on so many levels. I understand these soldiers have to take orders, but as one demonstrator questions "where is your heart?" How can go so far as to arrest villagers children in the middle of the night for no reason at all other than to intimidate the villagers? Why do people have to die over something so damn simple?

I commend Emad Burnat's efforts here. In today's society sometimes the best thing you can do is document your struggle on film. Opening the world's eyes to your situation can often bring about change faster than any other means. Emad's efforts certainly didn't solve the problem but they definitely helped. The man has scars he'll live with for a lifetime just because he wanted to get this all on film, but ultimately I think he did the right thing because it's what he believed in.

Ron's recommendation: Must see. Spreading the word of this struggle might be the best way to help the situation.