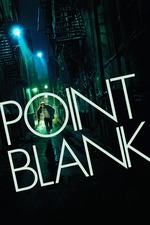 French filmmaker Fred Cavayé's action thriller À Bout Portant (Point Blank) would have more appropriately been title Foot Chase. A good portion of the film's action revolves around foot chases (the one thing many donut eating cops fear the most). Fortunately the people involved in these foot chases are in pretty good shape. The problem is when your big action sequences are pretty typical foot chases, and your story revolves around the done to death corrupt cops angle, your action will be dull and your thriller will lack thrill. That is exactly the problem with this film. Everything is so "been done before" I got bored.

Samuel (Gilles Lellouche) is a male nurse (almost). His wife is pregnant (7.5 months). She's supposed to be on bed rest and he's supposed to take care of her. Things are looking good until their tranquility is shattered after Samuel saves a thief at work and his wife is kidnapped.

Make no mistake about it, this film is nowhere near as interesting as it sounds. The interesting setup quickly became uninteresting as I watched people run like it was a Tom Cruise film. There's nothing particularly good about these foot chases. They're just foot chases with foot chase music. The plot didn't offer much in the way of interesting storytelling. It's a simple bad cops/good guys trying to clear their name affair. I guess the big catch was the pregnant woman as a hostage deal, like I've never seen that before.

A long with the completely uneventful action sequences came very generic characters played by very uninspired actors. This film received a decent amount of praise critically and I have no idea why. It's not terrible, just insanely unoriginal. Most films these days are, but if the other parts of the film are strong it makes up for it. That doesn't happen in this one at all. It's disappointing really. I was expecting something quite a bit better based on the reviews I read.

Ron's recommendation: Skip it. There's plenty of much better action thrillers out there to spend your time on.

The House I Live In