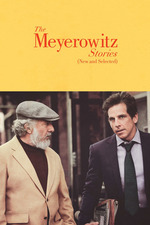 The Meyerowitz Stories (New and Selected)

after that first sweet bump of marriage story i obviously had to check out the next baum immediately available to me and thus there i was, 3am, railing lines of meyerowitz stories against my better judgement.
but fr this was amazing, examining a family dynamic from different characters’ perspectives simultaneously is something i haven’t really seen in a movie before and it works to great effect here, allowing you to understand the pain and flaws that each character has and thus account for their occasional adversarial moments. this film really nailed the “family experience” (at least in a way that’s relatable to me) by depicting a full spectrum of emotions that one can feel towards members of their family, all of which ultimately add up into what we call love.
writing was phenomenal obviously (i love how everyone kept saying “you should see the other dog”) and the acting as well (dustin hoffman is still the exact same as he was in the graduate). i only really have 2 strikes against this movie: the piecemeal nature of it made it feel longer and it definitely lost steam transitioning from the second to third acts, but more importantly i wish there was more jean! she was a great character in what little space she had to operate, and although the one scene focused on her was really good, i would have loved to see other aspects of her character explored a bit more.

ultimately, despite some things here and there that could have been better (what can’t?) i really loved this movie. its novelty in the network of relationships it explores and the tone, which made serious moments funny and funny moments serious (as is life) made it a great watch that i’ll surely be shooting up again soon.