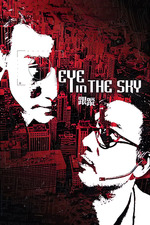 I wouldn't say this is that much better than Cold Eyes, but I do think its strengths align more with my personal taste than the Korean remake. While Cold Eyes is a slick surveillance thriller lacking in character development but making up for it in style and tension, Eye in the Sky is a leaner, gritty Hong Kong action flick, bursting with lively, unique personalities, which, in the end, is what separates this from the rest of the pack of serviceable tech thrillers. There are few fresh ideas here, but the execution of them is what helps this stand out whereas Cold Eyes falls into the same traps that this narrowly escapes. Both are bang average thrillers, but Eye in the Sky manages to capture the randomness of daily Hong Kong life in ways a Korean remake would never have been able to do. Simply put, Seoul is not Hong Kong, and while Cold Eyes certainly comments on the mundanity of the Korean police force, Eye in the Sky actually manages to express that in fun ways (Hong Kong food culture!). I have no qualms with the pacing of the remake, but the original is almost half an hour shorter, has generally better action scenes, and stronger characters, so while it may not be as clean or mainstream, I slightly prefer Eye in the Sky. More importantly, this is my first Johnnie To production, looking forward to more!