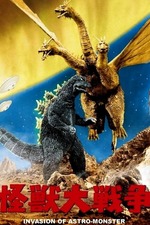 These movies keep descending even further into silliness and while I’m not complaining (I have loved the past three Mothra entries), this one just doesn’t have much else to offer, which sounds insane because this is one overstuffed movie. There’s so much going on here but none of the various storylines or characters are well developed, contrast that to Ghidorah, The Three-Headed Monster which manages to have a likeable cast of characters and even fit an assassination subplot in the mix. Idk, there are definitely some ideas with potential here but the metaphors never really go anywhere, and this is a series surviving off metaphors lol. What doesn’t help is that the actual kaiju shit plays second fiddle to the human plots, which would be fine if they didn’t feel so alien, pun intended. Not even the mystery is intriguing, fuckin’ boring movie. It amazes me that people call this the quirkiest so far, when it’s really dull and uninteresting compared to its predecessors. But easily my biggest problem is that the film’s resolution suggests that the terrestrial threats, nature itself, can be controlled by humanity, which is just quite antithetical for a kaiju film lol. Idk this one kinda sucked, was hoping for some fun but this is easily the biggest drop in quality the series has had since Godzilla Raids Again.