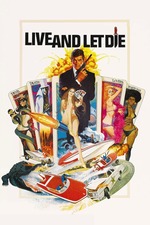 Roger Moore’s first outing as Bond is as middle-of-the-road as his run of films gets, but it’s also relatively small-scaled. Like a lot of the later Moore films there is a plot but it’s so convoluted and hard to follow that you almost have to stop thinking about it and just embrace the silliness that ensues. However, Live and Let Die is perfectly content with doing absolutely nothing in its first hour, instead it shamelessly rips the blaxploitation genre off as Bond indulges in even more misogynistic behaviour. Problematic gender and racial politics are a given in virtually any Bond film, that’s part of the fun for me when dissecting them, particularly the older ones, but Live and Let Die is insufferable. For some reason this film’s idea of story progression is placing Bond out of his element among black people, who are obviously all villains. This happens time and time again in only the first hour, and the waste of Jane Seymour as Solitaire also hurts. I wish this film made use of its groovy setting, I wish all the cool performances were assigned to characters with less simplicity and more nuance, and I wish all the women here weren’t totally passive to villain and hero alike, but it is what it is, and Live and Let Die is bang average. From the alligator scene onward I’d say it’s mildly entertaining, but that and the song aren’t enough to save this from mediocrity. Speaking of the song, it’s pretty clear that the Saw franchise stole it for its theme.