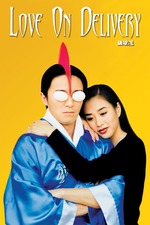 Stephen Chow, much like the heroes he plays, is just built different. This guy can remake his movies all he wants, I’ll never be sick of them. This one is basically Ip Man in plot and politics (the film is a comedy, but there is some Japanese occupation subtext here I think), but it’s also a romcom with Chow playing his own rendition of Rocky, all directed by Chow himself of course. I dunno how he does it but he keeps up this energy and sincerity for the entire film, no joke is ever exhausted, and the narrative just keeps on getting more and more bonkers. It’s damn near impossible for me to rank the four films I’ve seen from him so far, but Love on Delivery might be my favourite. The focus may not strictly be on the Kung fu here, and this hero isn’t some overpowered god either, he’s a fairly normal guy who’s even a little relatable. The film’s style is more restrained (which, if you’ve seen a Chow film, means absolutely nothing at all) and this down to earth feel kinda works really well. The film also has a musical number, in the Chow film I least expected. I think you get it, Stephen Chow is full of surprises, and he’s honestly becoming one of my favourites.