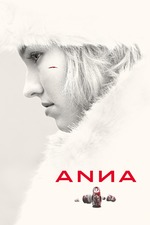 Anna allows Sasha Luss the opportunity to to deliver a compelling star turn in the leading role, but ultimately the film itself can’t quite match Luss’s performance, falling prey to a overly convoluted story structure and a needlessly elongated runtime.

As the titular protagonist, Luss admirably carries the film on her shoulders and proves to be far more than just a “pretty face”. I wouldn’t blame you for doubting the quality of another “model turned actor”, since the track record hasn’t been all that stellar, but Luss is legitimately quite captivating in the role. Whether she’s simply voguing with her nationally renowned beauty against gorgeous natural backdrops or effortlessly and brutally dispatching hitmen twice her size, Luss has an engrossing presence that keeps you glued to the screen, even in spite of some of the screenplay’s shortcomings. When Anna’s story grows more emotional, we too grow to feel for this broken and scarred individual trapped in her position as a weapon for forced beyond her control. We are with emotionally her throughout the entire journey, and this is all thanks to Luss’s commitment to the character.

The rest of the cast is likewise devoted to their roles, even if they don’t fully ever rise above their respective stereotypes. Helen Mirren plays spectacularly off-type as a snappy assassin trainer at the KJB named Olga, and her wholehearted investment really elevates what could’ve been bland characterization. As Anna’s two love interests, Cillian Murphy and Luke Evans are virtually just sexual pawns for the title character, but the story does find clever ways to weave their importance in and out of the film.

The general plot of Anna isn’t unlike any other comparable female-led spy feature (Atomic Blonde and Red Sparrow come to mind as recent entries in the subgenre), but while there aren’t certainly pulpy surface level thrills to be found, the script is otherwise a tad scattered. Anna’s own personal story shines through despite the surrounding messy material, but since the film feels the need to “stylize” its otherwise rudimentary storyline with sometimes confusing time jumps, the narrative can feel quite jarring, which throws the pacing off as well. A few twists are unique in concept - if a tad predictable - but the movie’s insistence to travel back in time and explain earlier events from a new perspective each time a new wrinkle is revealed can soon feel repetitive.

Sadly, there also isn’t as much action as you’d expect (a truncated version of the film’s greatest scene is given away in the film’s trailer), but these sequences are still very entertaining, particularly thanks to Luss’s impeccable dedication and slick editing. The plot does seem to hop around more than necessary (a common theme in these espionage thrillers), and it throws in a few subplots that seem like they could’ve been replaced with further fight scenes or excised completely, but it’s never really a bore to watch. Anna’s biggest flaw may simply be that it just doesn’t differentiate itself enough from other films of the same ilk, even if it doesn’t compete any insanely egregious flaws on its own.

As a now rare adult-targeted theatrical thriller, Anna serves its purpose to deliver a suitably mature story that nevertheless can’t quite transcend the typical trappings of its genre. Sasha Luss is the film’s saving grace, giving it a much needed edge and additionally declaring herself as a star on the rise.