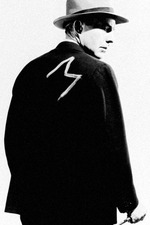 I feel like I keep saying that films are "fascinating," but this is kind of the quintessentially "fascinating" film to me, because it's hard to love it by virtue of my extreme familiarity with its source material. Fritz Lang's 1931 film by the same name is one I've watched and taught dozens of times, so Losey's 1951 version is, first of all, just very weird. By around the halfway point I stopped trying to hear sonic innovations (which are so pleasurable in Lang's film) and was able to start appreciating the different project that constitutes this one. There's the moment from which Kubrick draws inspiration in Killer's Kiss, which I hadn't known about until now. And there's Hollywood-style character development paired with overt homages to the German film that made my head spin. The latter is not really at all about individuals; even the individual who is the perpetrator is not singled out so much as he represents a sickness within society. Sure, this version goes there, too, but not before a lot more soapbox speeches and soliloquies and closeups that you just don't see in Lang's film. The way they adjusted the ending is actually quite brilliant, and some of the shots work both as throwbacks to Lang and also ingenious examples of framing in their own right. I paid like $9 for a very poorly-made DVD of this, and that's an injustice because it deserves better.