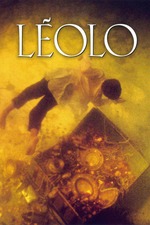 LÉOLO is another celebrated Quebec film that often pops up on lists of the best Canadian films of all time. Written and directed by Jean-Claude Lauzon, the story is a semi-autobiographical work about a precocious boy in Montreal's "Mile End" neighborhood, who retreats into escapist fantasy to process the misery of his impoverished slum-dwelling existence. Léo Lauzon is the youngest child of an eccentric family who believes he is actually Sicilian because his mother was in fact impregnated by a semen-soaked tomato. Thus, he takes to calling himself Léolo Lozone and rejecting his father and his French Canadian roots. Much of the film is comprised of coming-of-age vignettes, structured loosely around written diary entries that are rattled off by what I assume is an older Léolo in a transfixing monotone.

There must have been some sort of magical realist flu going around at this time because films like this were popular in the early 1990s. I was reminded of DELICATESSEN and LIKE WATER FOR CHOCOLATE, both heavily art-directed quasi-fables that deploy a similar bag of cinematic tricks. I'm not sure I really appreciate magical realism in general, but I enjoyed both of these films more than LÉOLO. LÉOLO is a decidedly grimier experience, the sepia-tone filters and filth-caked sets conveying a scatological aura.

I'm not opposed to disturbing content, but LÉOLO is a decidedly gross viewing experience. In this movie you will see a young boy cut a slit in a piece of flank steak, stuff it down his pants, and fuck it on the floor while he flips through a nudie magazine. Later you will watch his brother eat the steak and pick a pube or something out of his mouth. You will become acquainted with a family that prioritizes shitting above most things. The parents gives their children laxatives in order to live up to the axiom "a shit a day keeps the doctor away", and the father inspects the toilet after the children use it to ensure they are filling the bowl. You will witness a topless underage girl (obviously the actress wouldn't be underage, but I believe the character is supposed to be) suck an old man's gnarly toes, and spit out a nail-clipping. You will watch some creepy little snot huff glue from a paper bag and then rape a de-clawed cat. Not to mention Léolo's everyday antics: running around in his ginch, constantly masturbating, peeing off his front porch, and inspecting his junk with a hand mirror.

My wife kept walking in and out of the room throughout this movie and every time she'd come in there would be something weird and nasty on the screen. "What the hell are you watching?", my wife would ask, as the camera zoomed into Léolo's mother's cavernous crotch as she sits on a filthy toilet encouraging her weeping toddler son to shit. Fair question!

Now believe me when I say I have seen much more depraved content than I've described above, and have steeled myself for such sights and sounds through a lifetime of cinematic sensory abuse. But the weird thing is that it feels like Jean-Claude Lauzon is trying to make something whimsical and moving, Quebec's answer to CINEMA PARADISO or something, and just can't help but insert all this puerile junk into the story. It doesn't entirely work for me, and the generally off-putting vibe of the film makes its near-universal acclaim a confusing phenomenon. I don't really know what this film is trying to say. I suspect Lauzon is going for something that demonstrates beauty can be found in even the most festering, rancid situations. Beyond that, the story is thematically hollow, mostly just an exercise in overcooked art direction and gross-out provocation.

I will give it this-- it's certainly a singular piece of work. Just not my cup of feces.