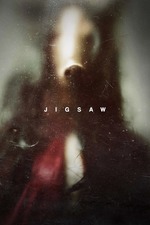 weirdly enjoyable and riveting for the first two acts, but it unfortunately doesn't take away the factor that it was predictable, rather tame in gore and torture and utterly preposterous given the Saw lore.

sure, it distracts you for 90mins but by the end of the movie I was left very dissatisfied, it could have been so much more, but it suffered from the woeful third act.

the "twist" was intresting enough to keep the narrative flowing, but in the end i kinda got tired by the predictability and inherent silliness that the film spouted out. it's the best looking Saw film for sure, it's stunning and beautifully shot.

as for the traps, all very tame in comparison to the originals which i was surprised at as in this time they sorely relied on the unnecessary use of gore and guts rather than the entire intriguing elements seen in the previous instalments.

the laser trap was gruesome as fuck and very cool, but the spiralizer is one scary motherfucker, might be my new favorite trap.

i may consider bumping it to a three star rating, but for now its on the borderline of average, i'd see it again, but definetly not on a full stomach.